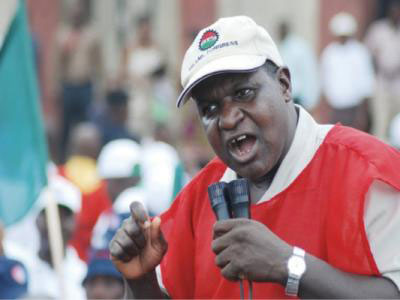 The National Union of Road Transport Workers, NURTW, has said that it will withdrawÂ  all commuter buses from roads nationwide from tomorrow when the Nigerian LabourÂ  Congress, NLC, kicks off a three-day warning strike to protest theÂ  non-implementation of the N18, 000 minimum wage for Nigerian workers.

The NLC has been agitating for a new national minimum wage for many years.Â  TheÂ current minimum wage is N7,500.

NURTW, at a press conference organised by the Labour and Civil Society Coalition,Â  LASCO, yesterday, in Lagos State, South West Nigeria, said that the withdrawal ofÂ  the buses is to ensure total success of the industrial action.

Paul Ogini, Deputy State Secretary of NURTW, who spoke on behalf of the Union, saidÂ  that the road transport workers would abide by every decision taken by NLC.

He maintained that the strike must go on, adding that commuter bus drivers may beÂ  barred from working just to ensure the success of the strike.

â€œWe are duly committed to ensuring that the strike action is fully complied with,â€Â  he said.

Comrade Abiodun Ogunade who represented the Trade Union Congress, TUC, said theÂ  strike must go on as the Federal Government has not shown seriousness duringÂ  negotiations.

Chairman of LASCO, Dr. Dipo Fashina, said: â€œWhat we are talking about is just enoughÂ  for transportation and pay for rent if you can do the job. It is not a fancy thingÂ  and not aimed at leisure.

â€œIf you look at what it takes someone to feed his family and provide health, it isÂ  clear to any rational being that the wage cannot go anywhere with a family of threeÂ  children.â€

Fashina wondered why the government and lawmakers at the National Assembly paid deafÂ  ears to the welfare of the countryâ€™s citizens.

According to him, while the average lawmaker earns above N10 million, the NationalÂ  Assembly has decided to pay deaf ears to workersâ€™ cries.

â€œWhen bills that would favour them come, they are quickly passed, but when it comesÂ  to the workers, they draw back.

â€œThey are giving themselves everything but when it comes to the workers, they sayÂ  wait,â€ he said.

He said that that while 13 Governors were in support of the new minimum wage, othersÂ  were trying to thwart the move.

Fashina said that Nigerian leaders have destroyed everything in the countryÂ  including education and health.

â€œIn Lagos, medical services are not working and roads have collapsed. Nigerians mustÂ  wake up and support the civil society groups so that they can enjoy a decentÂ  living,â€ he said.
The NLC had earlier vowed to shut down the country with effectÂ from 12 midnight onÂ  Tuesday.

According to him, â€œwe are going to shut down everything, including the airspace.Â Â  What can stop the strike is if President Goodluck Jonathan immediately sendsÂ  theÂ draft bill on the minimum wage agreement to the National Assembly to be passedÂ  intoÂ law.â€

Yaqub said President Jonathan was merely politicising the issue, adding that theÂ Â  agreementÂ  drafted by Justice Alfa Belgore, who was the chairman of the committeeÂ Â  set up to negotiate with labour,Â  has been with the Federal Government and thatÂ  whatÂ  is left is for the government to send it to the National Assembly.

He said President Jonathanâ€™s remarks that the Council of State will meet againÂ  overÂ the agreement already reached amounts to chasing shadows because stateÂ  governors hadÂ contributed to the agreement and some even suggested that the minimumÂ  wage be higherÂ than the N18, 000 being demanded. He advised President Jonathan toÂ  get serious or risk losing the trust of Nigerians.

Meanwhile, the tripartite meeting between the Federal Government, state governorsÂ  and representatives of the organised labour over the N18,000 minimum wage ended in aÂ  deadlock yesterday in Abuja, Nigeriaâ€™s capital.

But, after the meeting, the Chairman of the Nigeria Labour Congress Committee onÂ  National Strike, Adewusi said: â€œThe strike is very much on course. We just ended aÂ  meeting with Vice-President, Namadi Sambo. But unfortunately, nothing new was put onÂ  the table. So we are fully mobilised for Wednesday.â€

Adewusi said no progress was made at the meeting because the governmentâ€™s team,Â  rather than heed labourâ€™s demand, opted to ask for more time.

Also on yesterday, a formidable affiliate of TUC, the Petroleum and Natural GasÂ  Senior Staff Association of Nigeria, directed its members to participate fully inÂ  the strike.

Odah, who is the acting head of information of the NLC, said that the deliberationsÂ  ended in a stalemate because the government only pleaded with labour to call off theÂ  strike.

â€œWe decided to opt for the strike option because the Federal Government only went toÂ  the meeting to plead with us to shelve the strike and we said no. It is not as ifÂ  labour made new demands. That is not it, the issues are well known.â€