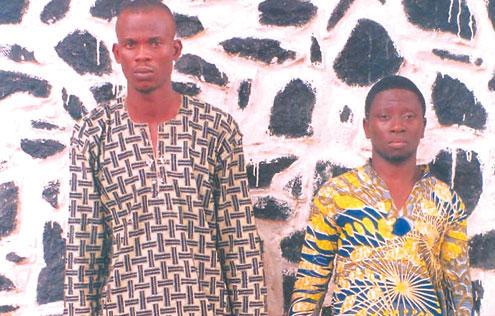 The suspects are Toyosi Olufowobi and Adekunle Tunde.

P.M.NEWS investigations revealed that the suspects perfected their act by callingÂ  one of the sub-agents of Golden Chance Lotto in order to conspire with him toÂ  defraud the lotto company. As the sub-agentplayed along with them, he also informedÂ  the police who later got them arrested.

According to Oluwofobi, â€œwe came to Ilaro from Ijebu-Ode . We had earlier reachedÂ  the Golden Chance Lotto sub-agent on his mobile phone that we were coming to see himÂ  so that we could stake some numbers and the sub-agent asked us how it would be done.

â€œWhen we got to Ilaro the sub-agent introduced us to principal agents and theyÂ  listened to our plan. We told them that we have some syndicates in Nigeria and GhanaÂ  and that after they might have drawn in Ghana, they would send the results and weÂ  would use it to win here. The winning numbers would have fetched us N22 million.

â€œThe submission is usually 7 p.m. and we told them not to close the bag with padlockÂ  so that we can put in the winning numbers, but unfortunately, they played along withÂ  us and they also informed the police who later arrested and charged us to court.

â€œOur plan was to give the principal agent N1 million, sub-agent N1 million and theÂ  representative N1 million. We have defrauded many lotto companies of millions ofÂ  naira. We also tried to defraud Premier Lotto but it was difficult for us to do so.â€

The suspects have since been charged to Ilaro Magistrateâ€™s Court and they areÂ  presently being remanded at Ilaro Prisons, while the case was adjourned till 10Â  December, 2010.

An Opel car that belongs to the suspects has been impounded and parked at IlaroÂ  Police Station.