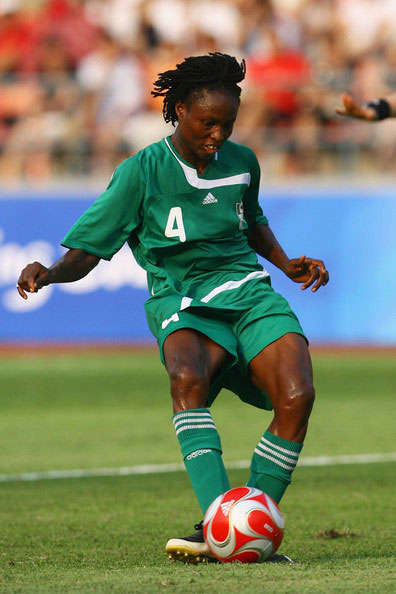 Nigeriaâ€™s Super Falcons this evening reclaimed the CAF African Women Championship, AWC, title as they defeated Equatorial Guinea 4-2 in an epic final played at the Sinaba Stadium in South Africa.

It was vengeance accomplished for the Nigerian ladies, who won their sixth of the seven AWC titles, after they were knocked out in the semi final stage of the last edition hosted and won by Equatorial Guinea in 2008.

Equatorial Guinea, who paraded two Nigerians in their squad- Chinasa Okoro and Shayo Jade- began the final on a high, making early incursions into Falconsâ€™ vital area but it was Perpetua Nkwocha, who opened scoring for Nigeria in the 7th minute.

She beat an E/Guinea defender before tucking in the ball through a pullout from Jerome.The early goal, which increased Nkwochaâ€™s total goal haul to 11, unsettled the E/Guineans who responded with a 10th minute effort.

An unmarked striker Natalia got a through pass inside the box but the player hesitated, thinking she was offside. By the time she raced after the ball, it was too late as it rolled into touch for a goal kick for Nigeria.

The pressure continued as both teams went out in desperate search for goals. This led to some dangerous tackles, especially in the 14th minute when defender Bilguinsa Simpore brought down a goal-bound Nkwocha and bagged a yellow card.

Falcons had a chance to increase their tally in the 15th minute but Iroka, who had the ball near the box shot wide. She opted to shoot instead of passing the ball to either Nkwocha or Desire Oparanozie, who were unmarked in the far left.

A similar chance came the way of Nigeria when Helen Ukaonu floated the ball inside E/Gunieaâ€™s box in the 18th minute, but Oparanozie, who was face to face with goalkeeper Miriam, shot wide.

The Coach Uche Eucharia-led Falcons missed many scoring chances through Stella Mbachu, Nkwocha and Oparanozie and kept the score line at 1-0 till end of the first half.

Goalkeeper Precious Dede, who doubles as skipper saved the attempts to level score by the controversial and masculine looking Simpore Salimata, while a 29th goal scored via a goalmouth scramble by an E/Guinea player who fouled the keeper was disallowed.

The second half saw E/Guinea dictating the early minutes with superb passes from the midfield marshaled by Nke with support from defenders Carolina and Bilguinsa Simpore.

The E/Guineans were close to scoring twice but Nigeria survived the scare when keeper Dede parried hot shots from Nigerian-born Chinasa Okoro and Salimata. The resulting corner kicks narrowly missed the target.

Falconsâ€™ Oparanozie grabbed a loose ball in a perfect position, broke through the opponentsâ€™ defence but failed to pass to unmarked players and lost possession of the ball.

The change brought about the expected change for the E/Guineans, who scored their equalising goal in the 62nd minute when defender Carolina overlapped to head home a corner kick.

The equalising goal by Guinea woke up Falcons from slumber as Oparanozie netted Nigeriaâ€™s second goal with a header from a Ukaonuâ€™s corner kick in the 76th minute.

With barely three minutes after Oparanozieâ€™s goal, Nke headed home an own goal through a cross from Mbachu to increase the scoreline to 3-1 in favour of Nigeria.

Shayo Jade, another Nigerian-born player who came in as a substitute, scored against her native country in the 82nd minute to reduced the tally to 3-2, but her jubilation lasted for just a minute as Carolina mistakenly deflected the ball from a pullout into her own net to seal a 4-2 victory for the Nigerian team.

Nigeria dominated the awards ceremony as Nkwocha received the Highest Goals Scorerâ€™s trophy, Stella Mbachu was named the Player of the tournament while Falcons also went away with the Fair Play Award along with the AWC trophy.