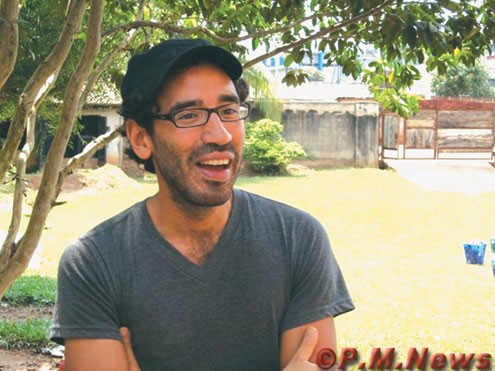 A Canadian, Mr. Romeo Gongora has expressed his love for the local delicacy,Â  â€˜moin-moinâ€™, widely eaten in Nigeria, saying that he is never tired of eating it.

The canadian demonstrated this during his visit to an Arts lover, Mr. Obi, at AjowaÂ  community in Ojokoro Local Council Development Area of Lagos State, South WestÂ  Nigeria. Mr. Obi was hosting a two-week workshop on arts with the theme: â€˜TriangleÂ  Artist Workshop.â€™

Speaking with P.M.NEWS while eating moin-moin, Gongora described it as his bestÂ  local dish.

â€œI like â€˜moin-moinâ€™ a lot. I can eat it three times a day without getting tired.Â  â€˜Moin-moinâ€™ is so spicy. â€˜Moin-moinâ€™ used to make my mouth pepperish. Sometime, IÂ  ate it thrice in a day and Iâ€™m never tired of it. Iâ€™ve requested the woman whoÂ  prepared it to teach me how to do it so that when I return home, I will be preparingÂ  it on my own,â€ he said.

He also expressed his disapproval for another local food, â€˜ebaâ€™.Â  â€œWhen I first cameÂ  here, I was eating light foods like rice, bread, fried plantain and others.Â  I alsoÂ  tried â€˜ebaâ€™ once but I could not eat it,â€ he said.

The Canadian spent a week among people at the grassroots and described hisÂ  experience as an eye-opener. He expressed dissatisfaction with the lack of socialÂ  amenities in the area. â€œThe community lacks good roads, water, electricity andÂ  public schools. I am appealing to the government to come to the aid of the people byÂ  providing them with these amenities,â€ he stated

According to Gongora, â€œI have come face-to-face with social problems posingÂ  challenges before ordinary Nigerians. If what I saw at Ajowa community was happeningÂ  across communities in Nigeria, the government needs to do more for the citizenry.

â€œI canâ€™t say I know Nigeria because I stay for just two weeks. I saw a goodÂ  weather, a serene environment and a place that keeps one away from urban Lagos but IÂ  canâ€™t understand how people are still surviving with their kind of roads. There isÂ  no water and electricity. Our host spent much money on buying diesel to run theÂ  generator. This makes living expensive, even in the community.

â€œThis environment is a very interesting world on its own. Everywhere is polluted;Â  there is pollution of air from generating sets all over the place. I experiencedÂ  pollution of sound from loud speakers from nearby churches. I saw young boys, girlsÂ  and sometime mothers searching for drinkable water.

â€œThe state government needs to come and assist the people in this community. From myÂ  findings, these people have been neglected and it corroborated what I have heardÂ  about countries in Africa,â€ he said.

On the goal of the workshop, the Canadian explained that it was aimed at pickingÂ  local artists for international exposure, adding that the workshop was vital forÂ  Nigerians because it could create the desired changes for the society, particularlyÂ  school leavers and young graduates.

â€œI am a facilitator and we assist artists to move abroad because some residents overÂ  there are ready to pay for the welfare of such artists. Art can change a lot ofÂ  things and there are several opportunities in it,â€ said.