Kudos And Knocks For PDPâ€™s Atiku 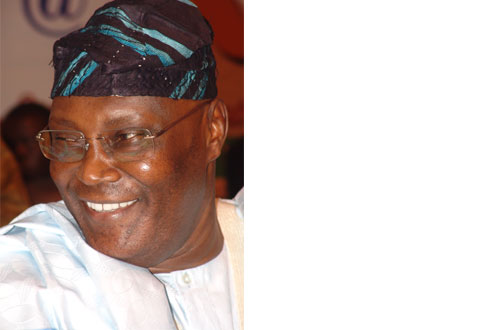 â€œAtiku is the consensus candidate of the Adamu Ciroma led NPLF and not the North asÂ  being mischievously played in the media. This is unless our definition of the NorthÂ  now excludes the Middle Belt, the large sections of the North East and sizeableÂ  chunk of the North West that have thrown their weight behind Jonathan,â€ Ima Niboro,Â  spokesperson for President Jonathan said in a statement.

P.M.NEWS however gathered that there was wild celebration among the aides ofÂ  President Goodluck Jonathan yesterday when news filtered in that the former ViceÂ  President has emerged as the consensus candidate of the North. As was gathered, thisÂ  was because former President Ibrahim Badamosi Babangida was considered a moreÂ  formidable opposition. Also, the former Vice President, in the opinion of some ofÂ  the aides and the campaign manager of President Jonathan, has lost a lot of groundÂ  in the PDP with his defection to the Action Congress in where he ran for theÂ  presidency in the 2007 elections.

They also pointed to the fact that Atiku has been having a running battle withÂ  Murtala Nyako, the Governor of Adamawa, his home state which has led to crisis inÂ  the state chapter of PDP. It was thus believed that he may not have the totalÂ  support of his home base. It was gathered that the presidency also believed thatÂ  Atiku does not enjoy the support of most of the state governors. Just like theÂ  Presidency, Alhaji Balarabe Musa, Chairman, Conference of Nigerian

Political Parties, CNPP said the with the emergence of Atiku, the task of defeatingÂ  the ruling party in the 2011 elections by the opposition has been made easier.Â  Balarabe also agreed that Babangida would have been a more formidable opponent inÂ  the coming polls if he had emerged as the consensus candidate. But Senator JubrilÂ  Aminu told journalists that the emergence of Atiku is in the best interest of theÂ  North. He however said the consensus arrangement will enable the North to maximizeÂ  its voting strength during the presidential primaries of the PDP.â€ It is veryÂ  important in the contest of our defensible and non defensible geo political interestÂ  to pick one person and that is itâ€, said the lawmaker. But an Abuja based lawyer,Â  Barrister Chukwuemeka Chimezie said the choice of Atiku is the best among the fourÂ  candidates being considered by the Ciroma Committee. He however noted that theÂ  former Vice President has a lot of baggage that can be used against him. BarristerÂ  Yamah, another Abuja-based lawyer said Governor Bukola Saraki of Kwara State wouldÂ  have been a better choice, as a youthful candidate. The Abuja based lawyer agreedÂ  that as a candidate, Atiku has access to enough resources to prosecute his ambition.Â  He dismissed the whole idea of a consensus candidacy, saying it is divisive and hasÂ  resulted in enough bad blood in the Nigerian political firmament.

Also, Aremo Olusegun Osoba, the former governor of Ogun State, said the matter isÂ  for the PDP and not ACN, adding that Atikuâ€™s selection has no effect on theÂ  programmes of the ACN.

According to Bisi Adegbuyi, ACN senatorial aspirant for Ogun East, â€œwe are not inÂ  anyway concerned with whatever politics that is going on in the PDP. The PDP isÂ  bound to lose this election, no matter who emerged as their presidential candidate.

â€œThe strong anti-incumbent sentiment that is spreading all over the world is boundÂ  to negatively affect the political fortunes of the PDP, just as it affected theÂ  Labour Party in the UK, Republican party in the US and lately the Democratic Party.

â€œPeople are disenchanted with political incumbents and Nigeria cannot be anÂ  exception. Nigeria is worst in the hands of the ruling PDP,â€ he said.

According to the Lagos State Chairman of the ACN, Otunba Henry Ajomale, theÂ  emergence of Atiku emerging as the consensus candidate of the PDP has nothing to doÂ  with his party, adding that as far as he was concerned, ACN is going to defeat theÂ  PDP in the forthcoming general elections.

Ayo Opadokun also described the emergence of Atiku as another instant of the dubiousÂ  nature of Nigerian politics, adding that the fact that a crowd of politicians in theÂ  north had to pick Atiku speaks volume of the democratic nature of Nigeria.

â€œFor all intents and purposes, Atiku is a complimentary specimen to the politicalÂ  system of Nigeria. His political tutelage was not that of an ideological spectrum.Â  The basis of their politicking therefore was the commercialisation of NigerianÂ  politics.

â€œSo, I therefore imagine that the idea of consensus politics is not a complimentaryÂ  competition of liberal democracy.

â€œI hope they would be much more engaged in discussing issues rather thanÂ  personalties, â€ he said.

In his own reaction, the national leader of Arewa Youth Consultative Forum, YerimaÂ  Shetima, described the selection of Atiku as a PDP affair â€œand PDP is not the onlyÂ  party in the North.â€

â€œIn the present dispensation, people like Adamu Ciroma should not talk as aÂ  representative of the North because he and the candidate that is being showcasedÂ  have failed the people of the region before now. Both Ciroma and Atiku have noÂ  credibility.

â€œIf you look at all the contestants, you will realise that Atiku has the leastÂ  credibility. From reports reaching me, the decision to pick Atiku was influenced byÂ  former President Olusegun Obasanjo because Ciroma and Obasanjo are very close andÂ  Obasanjo sees Atiku as the next best alternative to work with, if Jonathan does notÂ  emerge.

â€œWe reject this decision. When the time comes, we will make our statement, but IÂ  know the decision of the committee will not see the light of the day,â€ he stated.

â€œ For sometime now, we have been waiting patiently for the committeeâ€™s decision. TheÂ  fact that you say you want a consensus candidate showed that they are scared ofÂ  Jonathan as a contestant for the presidency. Atiku should have been an institutionÂ  because of the way he fought the Obasanjo-led government and won several times. HeÂ  deviated from the objective because of his desperation to become the president.

â€œHis desperation further made him to ditch the ACN for the PDP, a party he hadÂ  several times insulted. Atiku is an unstable politician and a child we should notÂ  trust with a country such as Nigeria,â€ Okolugbo submitted.

He disclosed that the Jonathan/Sambo Campaign Organisation had successfully won overÂ  the states in the South West through Ogun State Governor, Otunba Gbenga Daniel, theÂ  South East with the cooperation of Enugu State Governor, Martins Elechi and theÂ  South South.

He added that the group has also made inroads in states in the North which hasÂ  increased his confidence that Jonathan will emerge as the PDP candidate andÂ  eventually elected as president of Nigeria in the 2011 elections.