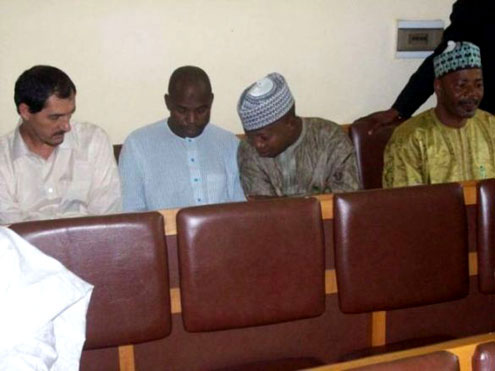 Three Nigerians and an Iranian citizen were late this afternoon brought before an Abuja Magistrate Court presided over by Mrs. Hafsat Soso for allegedly importing prohibited arms and ammunition into the country.

Mr. M. U. Idakwo, the lawyer representing the State Security Service, told the magistrate that the accused persons were brought to the court for the court to take cognizance of the allegations hanging on their heads and sought for the courtâ€™s order for their continued remand at the SSS custody.

The accused persons were alleged to have conspired to commit a criminal act, to wit, the importation of 13 feet by 20 feet container loaded with prohibited fire arms meant to be exported to Banjul, Gambia.

The accused persons; Mr. Azim Aghajani (an Iranian), Aliyu Usman Jega, Aliyu Oroji Wamako and Mohammed Tukur Umar, were brought to the court amidst a heavy contingent of combat ready operatives of the State Security Service and mobile police units.

The plea of the Iranian could however not be taken as he requested for the legal adviser in the Iranian embassy to be present as his counsel before he could take his plea. The Magistrate subsequently suspended the issue of taking his plea pending when the Iranian embassy could be reached to arrange for legal representation for Mr. Azim Aghajani.

The Nigerian suspects all pleaded not guilty to the allegation even though two of them were not represented by any lawyer at the proceedings. Aliyu Usman Jega and Mohammed Tukur Umar claimed that they were not allowed to contact their lawyers but the 3rd accused, Aliyu Oroji Wamako, the owner of the Clearing Agency which cleared the shipment from Apapa port was represented by a lawyer, Mr. Abba Gaji.

Mr. Gaji made an application for the bail of his client but the prosecutor objected pointing out that the matter for which the accused persons wee brought before the court is of grave national security interest which has international implications. The SSS lawyer told the court that the prohibited arms were imported from Iran and were headed to Gambia. He also stated that the United Nations is very interested in the matter.

Mr. Idakwo further stated that due to the gravity of the offence and the interest it has generated world wide, that the matter needed to be investigated meticulously and requested for 60 days to enable the SSS complete investigation for their trial to commence.

He conceded that the accused persons are presumed innocent until proven guilty by the court but maintained that the constitutional guaranteed freedom of every Nigerian is subject to limitations as it is subsumed under the national security of the country. He also told the court that the quantity of the arms imported into the country by the accused persons was such that can sink the entire country.

Furthermore, Mr. Idakwo observed that the application for the bail of the accused person ought to have come before the court by way of formal application as against the oral submissions made by Mr.Â  Gaji.

The Magistrate agreed with the SSS on the ground that investigation is still ongoing in the matter and adjourned further hearing on the matter to Monday, 31st January, 2011 and ordered that the accused persons be remanded at the SSS custody.