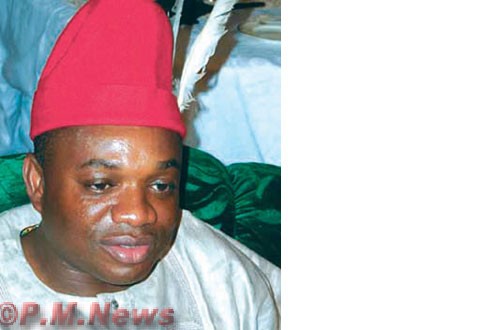 Kalu who is standing trial over an alleged embezzlement of 5.2 billion Naira while at the helms of affairs in Abia state was in 2007Â  granted bail in the sum of a hundred million Naira and 2 sureties in like sum. The would- be sureties were to deposit their certificate of occupancies to landed properties.

The senator, through his counsel, Mr. Kevin Emeka Offor intimated the court that he is no longer interested in standing surety for the former governor and sought for his discharge by the court.

Eze Ihejiamaizu on his part through an affidavit deposed to by himself, told the court that he entered as surety to Dr. Orji Uzor Kalu because of the confidence which he had in him then but that he no longer have any confidence in the former governor and is no longer interested to stand as surety to him.

He further stated that he and the former governor have not been associating with each other and that he can no longer vouch for him being unaware of his movements and actions.

Signs that all may not be well with the former governor emerged before the commencement of the dayâ€™s proceedings when Armed Squad unit of the Prison Services and an unusual presence of operatives of Economic and Financial Crimes Commission were noticed within the court premises.

It became apparent in the course of proceedings that the anti graft agency had anticipated the possibility of re-arresting the former governor when and if his sureties are discharged.

This was however not to be as lawyers to the former governor were opposed to the Abia state Commissioner for Information, Mr. Anthony Agbazuere appearing on behalf of the traditional ruler to move the motion for his discharge as one of the former governorâ€™s surety.

Mr. Agbazuere relied on the Court of Appealâ€™s decision in a matter involving T. A Orji, the Governor of Abia state, to argue that he is not covered under section 8 (1) of Professional Conducts for legal officers which bars a salaried officer from representing his employers and noted that he is merely representing his traditional ruler an a free of charge basis.

The duo of Mr. Awa Kalu and Solo Akuma, both senior advocates of Nigeria vigorously opposed this position and argued that the case which the Commissioner is relying on is not applicable in this case. They both urged the court to discountenance all the submissions made the Commissioner.

On his part, the counsel representing the anti graft agency, Mr. Rotimi Jacobs also disapproved of the Commissioner getting involved personally as to representing the traditional ruler. He observed that it is going to be a dangerous precedent if a political appointee like Commissioners will not leave the court for the private lawyers and be practicing at the same time performing their political duties. He relied on schedule 5, part 1, and article 2 of the Nigerian Constitution and argued that a public officer cannot engage or participate in running of any business.

Undeterred, Mr. Agbazuere insisted that the position of Mr. Jacobs does not apply to him as the Court of Appeals had interpreted section 318 of 1999 Constitution and argued that a serving Commissioner is not a public officer and urged the court to disregard the submissions of the other lawyers. He however opted to allow another lawyer to move the application to move on with the case to enable the court rule of the contentious issue of his appearing for his traditional ruler.

Presiding judge, Justice Adamu Bello however adjourned further proceedings to 20th December for the ruling on the issue as well as for the applications filed by Senator Chukwumerije and the traditional ruler withdrawing as the former governorâ€™s sureties to be taken.