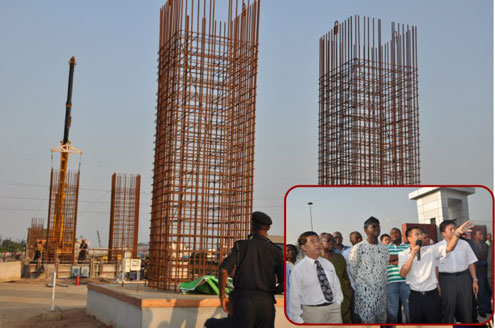 Lagos State Governor, Mr. Babatunde Fashola (SAN), was impressed by the pace of work on the Stateâ€™s Light Rail Project to run from Okokomaiko to Marina, as Blue Line. He said the project has moved from being a vision to a dream and finally to reality.

After a working tour of the project site at Iganmu in the Apapa Local Government Area of the State, Governor Fashola said with the concrete piers already going up at Iganmu and other infrastructure being put in place by China Civil Engineering Construction Corporation (CCECC), the company handling the project, there is every hope that the conclusion would be reached quickly.

â€œWe have moved from vision to dreams and to reality. The project has taken off; the baby has been born, it is left for us to nurture it to adulthoodâ€, Governor Fashola said adding that by 2012, the first seven kilometres of rail would be ready for operation.

He said the concrete pillars being set up at Iganmu would hold the rail bed that will link the rail line to Iddo on its way to Okokomaiko adding that with the completion of the first seven kilometres of the rail line, five stations would also have been completed adding that the according to the terms of the contract, the concessionaires would be supplying the coaches for full operation.

â€œThere is still work to do but the important thing is that without fanfare, without celebration, the project has taken offâ€, Governor Fashola said adding that it is going to be the most significant project in the State.

According to the Governor, at least 2, 000 Nigerians have already been employed and by next year another 1, 000 will also be employed adding that by the time the project is in full gear, no less than 8,000 people would be employed by the company handling the project.

â€œThis is going to be the most impactful project this State has ever had. You can only imagine the number of people that will be employed, both directly and indirectly, when the project is finished. It will reduce travel time and all the stress associated with traffic will be removed. Lagosians will travel in comfortâ€, the Governor said.

Governor Fashola noted that the Blue Line now under construction would form the corridor for the remaining six rail lines going to Agege, Alimosho, Ikorodu and other parts of the State adding, â€œThis is the most important of the seven rail lines that we plan to constructâ€.

On the supply of electricity which is essential for the efficient operation of the rail system, Governor Fashola declared, â€œThis project has been designed to supply its own electricity. We spent two and half years planning this project. We sought and found the best team, those who have done it successfully in other places of the world. Life is about planning and efficient management. We planned for the worst and we are hoping for the bestâ€.

Earlier, while conducting Governor Fashola round the project, the Deputy Managing Director of CCECC and Project Manager, Mr. Shi Hongbing, said the pre-castings for the rail bridge have reached 70 percent completion assuring that before 2012 the company would complete the rail from Mile 2 to the National Theatreâ€.

Also present at the CCECC project site were the Chinese Consul General in Lagos, Mr. Guo Kun, the Chief of Staff to the Governor, Mr. Lanre Babalola, the Director General Public Private Partnership (PPP) Office, Mr. Ayo Gbeleyi, the Special Adviser to the Governor on Works and Infrastructure, Engineer Ganiyu Johnson, officials of CCECC and other top Government functionaries.

Governor Fashola later visited Adeniran Ogunsanya Street in Surulere where he inspected the progress of work on the road which is at present undergoing reconstruction.