Aregbesola Yet To Move Into Govt House, Wants Cleansing By Clerics 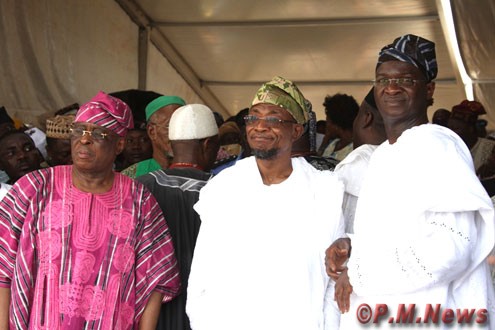 â€¢Gov. Rauf Aregbesola (m), with Aremo Segun Osoba and Gov. Fashola in Oshogbo at the weekend.

Three days after being sworn in as the Osun State Governor, Engr. Rauf Aregbesola,Â  is yet to move to the Government House in Osogbo, the state capital.

P.M.NEWS gathered that the new governor is still operating from his privateÂ  residence in Ilesha.

A close aide of the governor told P.M.NEWS this morning that a lot of cleansing willÂ  have to be done in the house before Governor Aregbesola can move in.

It was gathered that both Muslim and Christian clerics have been contacted to offerÂ  prayers in the house and the vicinity to ward off the ghost of the pastÂ  administration.

â€œOga cannot just move in like that. He has not packed in. Christian and MuslimÂ  clerics have been contacted to come and offer prayers in the house and theÂ  surroundings to ward off the ghost of the Olagunsoye Oyinlola administration.

â€œRight now, the governor is still operating from his private residence,â€ the aideÂ  explained.

P.M.NEWS also gathered that the past governor of the state, Olagunsoye Oyinlola,Â  packed out of the Government House, Osogbo for his Okuku residence shortly after theÂ  appeal court judgment which sacked his administration.

Meanwhile, thousands of residents of Osogbo this morning trooped out and escortedÂ  Governor Aregbesola to his office in the State Secretariat, Abere, Osogbo.

Amidst singing and drumming, the residents led Governor Aregbesolaâ€™s convoy toÂ  Osogbo. It took more than one and half hours for Aregbesola to get to his office asÂ  a result of the huge crowd.