Fuel Queues Back In Lagos, Abuja 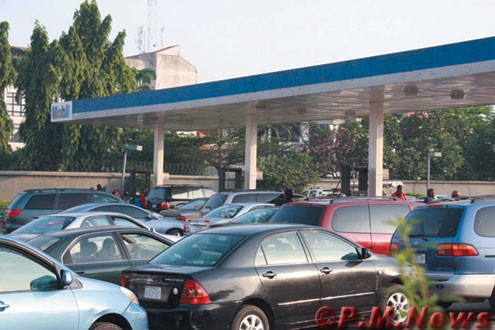 The tanker drivers, under the aegis of the National Union of Petroleum and Natural Gas Workers, NUPENG, began a 7-day warning strike nationwide yesterdayÂ  to protestÂ  the killing of one of their members in Jos, Plateau State. The protesting drivers accused the Federal Government of not taking action against the culprit and also refusing to compensate the family of the victim.

Several vehicles were seen queing in front of filling stations this morning, waiting to buy petrol. In some areas, the scarcity was not so pronounced.

At some filling stations at Abule Egba area of Lagos, long queues were noticed early this morning as motorists struggled to buy fuel.

There was panic buying at the Nigerian National Petroleum Corporation, NNPC Filling Station at Abule Egba. Some motorists were seen filling their fuel tanks and buying fuel in kegs at the same time.

At Mobil Filling Station, Ijaiye, Ogba, long queues were noticed.Â  Motorists and motorcyclists thronged the station to fill their tanks to last them throughoutÂ  the strike period. The same goes for Oando Filling Station at Berger where several motorists were observed queing to purchase fuel.

In Akute, many filling stations were not selling fuel at all, as the tanker drivers have not supplied them fuel.

At Ikorodu Road, queues were noticed at filling stations but the fuel attendants were selling the product at the normal price to motorists and motorcyclists. Several people also came to the stations to buy in kegs.

At Oando Filling Station, Fola Agoro, Somolu, long queue was noticed as fuel was being dispensed to customers from one pump out of the four pumps in the station.

The Depot Manager, Mr. Ayoola Erinoso told P.M. NEWS that the station had not received fuel supply since yesterday as a result of the strike.

Many of the motorists interviewed cannot identify the cause of the long queues. Some of them said they woke up to observe the long queues at the filling stations this morning.

However, in Ejigbo area, most of the filling stations visited were selling fuel and there were no queues.Â  Filling Stations visited included Oando, MRS, Destiny and NNPC Depot.

Major filling stations in Abuja, including the NNPC mega stations, had queues reaching up to about 400 metres.

Operators of black market instantly took advantatage of the situation to hawk petroleum products at exorbitant prices. Some sold 10 litres of fuelÂ  for about N2, 000.

Independent marketers like Texaco, Total, AP and others situated along IBB Way and Conoil Filling Station used one fuel pump.

Also In Kaduna State, there were long queues as motorists rushed to get fuel yesterday after news filtered in that tanker drivers have withdrawn their vehicles from the roads.

Some commuter bus drivers interviewed told our reporters that they could not afford the traumatising and time wastingÂ  search for fuel again.

A bus driver, Sule Usman, and many others pleaded with those concerned to resolve theÂ  issue quickly to avoid scarcity .

Most of the filling stations within the Kaduna metropolis were selling. There was a light queue at some of the stations. At one of the NNPC mega stations in town, the station manager gave assurance that they would continue to sell fuel while the strike lasted.

Speaking with P.M.NEWS this morning, the Zonal Chairman, NUPENG, Lagos State, Comrade Tokunbo Korodo said the strike would last for seven days and that it was a warning strike to make the Federal Government and the military authorities compensate the family of one of their members killed by military men at a checkpoint in Jos, recently.

Korodo lamented that the tanker driver was killed by the military at a checkpoint because he refused to give them bribe, which they had been collecting from other motorists.

â€œThe military authorities are not doing anything about compensating the family of the deceased tanker driver.Â  We have met with the NNPC and the Minister of Labour and nothing had been done about the situation.

â€œWe gave them an ultimatum which expired on 26 November.Â  We started the strike yesterday and the impact is being felt already.Â  They shot him because of â€˜egunje.â€™Â  It is a shame to the nation,â€ he stated.