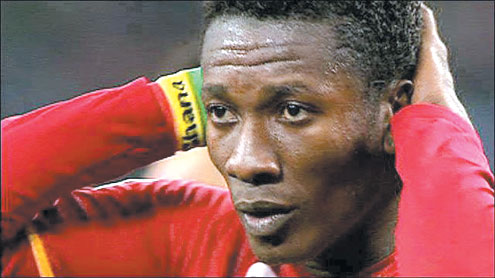 Black Stars and Sunderland striker, Asamoah Gyan has a secret admirer back in Accra.Â  The lady, Obaa Yaa wants Gyan to take her to the altar this December or she willÂ  ‘kill herself.’

P.M.News gathered today that the Madina-based lady was on Deloris Frimpong Manson’sÂ  entertainment programme, Delay on TV Africa at the weekend, professing her ‘deep’Â  love for Asamoah, who would be profoundly surprised his new fame is also grabbingÂ  for him new friends.

While narrating her ‘sleepless nights’ awaiting Gyan’s love, the young GhanaianÂ  woman, according to a Ghanaian website said the Black Stars arrow head must requiteÂ  her love for him. Yaa said she is so madly in love with Gyan to the point thatÂ  suicide is the only option, if the soccer star spurns her love proposal.

The crazy lover said: â€œBrother Asamoah, please I want to tell you that I want toÂ  marry you by this December,â€ she also told a local radio station. â€œIf you donâ€™tÂ  marry me, I will kill myself.

â€œI like his hair style, the colour of his skin make me fall in love with him. EvenÂ  his dance moves when he is rapping in his music makes me fall madly in love withÂ  him.

â€œI am having sleepless nights over this, so, I want him to rescue me by thisÂ  December.â€

Yaa revealed that she is helplessly in love with the football star, and now musicÂ  star and she wants him to marry her by 24 December or â€œI will kill myself,â€ sheÂ  said.

She is mesmerized by Asamoahâ€™s haircut, skin tone and the excellent skill heÂ  exhibits not only on the football field but also on the music scene.

According to Yaa, she has been having sleepless nights and to prove her love to theÂ  footballer, she has even learnt the starâ€™s after-goal dance moves as well as his jigÂ  in the video of Castro’s latest hit song African Gils in which Gyan features.

Dark-skinned, bushy-haired and fat Yaa was insistent on â€œI love you so much” and â€œIÂ  will kill myselfâ€, and was all dancing to “African Girls on the show.

In a swift reaction to Yaaâ€™s shocking love advances, the Sunderland striker whoÂ  spoke to Ghanasoccernet.com said he will respond to her proposal today.

Gyan was born on 22 November, 1985 in Accra and attended high school at AccraÂ  Academy where he played in the schoolâ€™s football team.