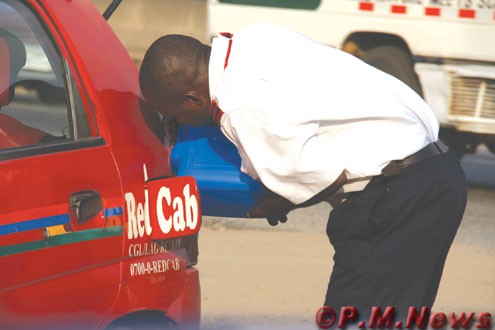 Taxi driver filling his car with fuel bought from black market despite the call off strike by NUPENG workers today. PHOTOS: Idowu Ogunleye.

The long queues witnessed in Lagos filing stations yesterday have vanished,Â  following the suspension of the seven-day warning strike embarked upon by tankerÂ  drivers under the aegis of the National Union of Petroleum and Natural Gas Workers,Â  NUPENG.

The tanker drivers were protesting the killing of one of their members in Jos,Â  Plateau State.

According to the tanker drivers, the federal government did not take action againstÂ  those that killed their colleague and did not even compensate the deceased family.