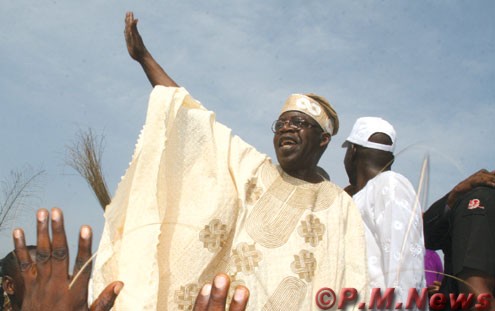 The former governor made this call at the tenth anniversary of the Office of PublicÂ  Defender, OPD, in Lagos.

Asiwaju Tinubu said there was urgent need to strategise on how to wrest power out ofÂ  the hands of what he described as the tyrannical PDP.

â€œOur nation today faces perhaps its most monumental challenge, how to dislodge anÂ  immoral and directionless group of people parading themselves as a political party,Â  the PDP, at the federal level and all the states they have stolen from the lawfullyÂ  elected representatives of the people.

â€œIt is a struggle that we must win if this country is to be free from poverty andÂ  despair.Â  Again, we cannot afford to sit and wait, all of us must join forces withÂ  the progressive movement in our nation which is challenging this immoral machineÂ  that threatens the wellbeing of our nation,â€ he stated.

Tinubu also described the seven and half years reign of former Governor of OsunÂ  State, Olagunsoye Oyinlola, as tyrannical, saying that Oyinlola had plunged theÂ  state into the abyss.

â€œAgain, seven and half years of Oyinlola tyranny in Osun State has turned that onceÂ  proud part of the Western region to a wasteland of depressed and impoverishedÂ  people.Â  On Saturday, we began the task of restoration.

â€œNo matter how powerful a tyrant may be, a few determined people who say â€˜noâ€™ andÂ  are prepared to stand and fight will eventually bring down the giant with a feet ofÂ  clay,â€ he said.

According to Tinubu, â€œwe, who want to enthrone basic freedom, democracy and decentÂ  lives for our people, must fight for power by all democratic means.Â  We cannot sitÂ  and hope that power will be dropped on our laps.

â€œPower, like I always say, is never served a la carte. You go into the kitchenÂ  yourself, feel the heat and fumes in your face, as you struggle for it.â€

The former governor stated that when power â€œfinally is ours, we have a duty to GodÂ  and to the people not to use it in the way that our oppressors did.

â€œWe owe it also to ourselves as decent human beings entrusted with the sovereignÂ  will of the people to ensure that the authority of government is used to enhance theÂ  lives of the people, to guarantee liberty and provide jobs and access to justice.â€

He explained that the OPD was set up in 1999 to provide free legal services to theÂ  less privileged in the society who could not afford the cost of justice.

â€œThe OPD was our way of saying to the poor—your defence against criminalÂ  prosecution or your civil claims, if you cannot afford to get a lawyer—is also theÂ  business of a democratic government.

â€œWe were saying to the people—justice will not elude you simply because you areÂ  poor.Â  This remains our commitment as a party and the commitment of the Lagos StateÂ  Government and the Ministry of Justice has continued to uphold this withÂ  dedication,â€ he stated.

Tinubu noted that thousands of people from all ethnic groups haveÂ  benefitted fromÂ  the OPD over the years, saying that this was how it should be because governmentsÂ  must show tangible and real benefits to the people for entrusting the responsibilityÂ  of leadership to them.