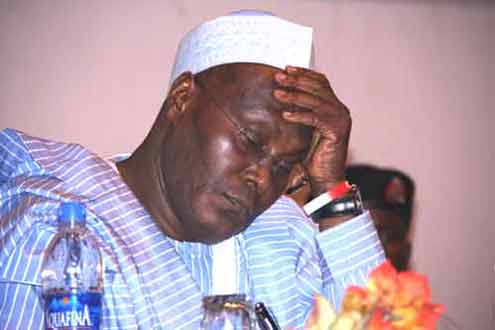 â€¢Atiku in deep reflection at the launch of a book, yesterday in Lagos. PHOTO: IDOWU OGUNLEYE.

Hopes for judicial backing by former vice-president, Atiku Abubakar and otherÂ  campaigners for the zoning of the candidacy for presidency to Northern Nigeria, wereÂ  dashed this morning in Abuja, by a Federal High Court.

Justice Lawan Hassan Gunmi, Chief judge of the Federal Capital Territory High CourtÂ  gave a definitive ruling on the controversy over zoning and rotation of publicÂ  offices as enshrined in Article 7 (2 c) of the constitution of the Peopleâ€™sÂ  Democratic Party, PDP,

In hisÂ  judgment delivered in a suit filed by Mr. Sani Aminu Dutsema, a presidentialÂ  aspirant under the PDP, the FCT Chief Judge held that although zoning and rotationÂ  of public offices were enshrined in the PDPâ€™s constitution, the partyâ€™s constitutionÂ  failed to specify how they should be applied.

Dutsema had approached the court to challenge the candidacy of President GoodluckÂ  Jonathan in the forthcoming party primaries for the selection of the partyâ€™sÂ  candidate for the presidential election in 2011.

The applicant through his counsel, James Obiahor, called on the court to hold thatÂ  the North was bound to produce the presidential candidate for both 2007 and 2011Â  elections in accordance with the zoning principle of the party since the South hadÂ  enjoyed two terms in 1999 and 2003.

Dutsema also called on the court to hold that the PDP will be in breach of its ownÂ  constitution if it sponsored any other candidate outside the North for the 2011Â  presidential election.

Further, the PDP presidential aspirant sought for an order of the court mandatingÂ  the party to comply with its constitution.

In its opposition to the suit, the PDP contended that the issue of nomination andÂ  sponsorship of a candidate for any election â€œis an internal affair of the politicalÂ  party which the court has no jurisdiction to interfere with.â€

In its judgment, the court disagreed with the PDP on the issue of locus standi andÂ  noted that the plaintiff having exhibited his membership card with properÂ  endorsement of payment of deposit fee â€œis clearly a bonafide member of the party andÂ  as such has his locus to instigate the action.â€

However, it agreed with the PDP that the rules of the court did not empower it toÂ  interfere where the issue for determination is an internal affair of a politicalÂ  party.

The court also held that the minutes of the enlarged national caucus of the PDPÂ  which deliberated on the issue of zoning as exhibited by the plaintiff did not carryÂ  the signature of the national chairman and national secretary of the party. And asÂ  such carried no weight in law.

The same applied to the letter purportedly written by a former Chairman of the BoardÂ  of Trustee of the party to the national executive committee of the party on theÂ  principle of zoning and rotation of public offices which was also exhibited by theÂ  plaintiff.

Though the court agreed with the plaintiff in relation to Article 7 (2) (c) of theÂ  party recognising zoning and rotation, the Chief Judge stated that he cannot holdÂ  that the North should bear the presidential ticket of the PDP as that is a politicalÂ  question which is not justiceable.

Consequently, the court declined to hold that the PDP will be in breach of itsÂ  constitution if it sponsored Jonathan, as the article did not indicate or specifyÂ  how zoning and rotation should be conducted.

Jonathanâ€™s candidacy has sparked some Northern irredentism, with some fellow partyÂ  members urging him to abandon the idea, as the North, going by the partyâ€™sÂ  constitution, should produce a candidate for the party. Jonathanâ€™s predecessor,Â  Umaru Yarâ€™Adua died suddenly in office, without completing a possible eight yearÂ  term. He had spent about three years, when he died after a protracted illness lastÂ  May. His emergence in December 2006 was in fulfilment of the partyâ€™s zoning spirit,Â  as his own predecessor, Olusegun Obasanjo comes from the South West.

Not comfortable with Jonathanâ€™s emergence as a candidate, a group of leaders underÂ  the aegis of Northern Political Leadersâ€™ Forum, mounted a spirited campaign to makeÂ  Jonathan change his mind. And when he did not, the group made the aspirants from theÂ  North to unite forces and accept the nomination of one of them as the jointÂ  candidate.

It is believed in some circles that the case spiked by the court today was sponsoredÂ  by political interests, with affiliations with the NPLF.

With this ruling, the coast is now clear for President Goodluck Jonathan to contestÂ  the PDP presidential ticket with the former Vice President Atiku Abubakar, theÂ  consensus candidate of the Mallam Adamu Ciroma-led Northern Political Leaders Forum,Â  who was picked on Monday, 22 November.

The zoning controversy became so devisive that it nearly tore the party apart.

Atiku rejoined PDP some months ago, having left the party in 2006 to pursue hisÂ  presidential ambition on the platform of the Action Congress (AC). He got a specialÂ  waiver to contest for the presidential ticket of the PDP after an initial reluctanceÂ  by the Adamawa chapter of PDP to readmit him.

On returning to PDP, he was said to have suggested the idea of a consensus candidateÂ  among all the northern aspirants so as to present a united front. The suggestion ledÂ  to the elimination of other presidential aspirants like Ibrahim Babangida, AliyuÂ  Gusau and Bukola Saraki.

Atikuâ€™s immediate task now is how to justify the confidence reposed in him by theÂ  nine-man selection committee.