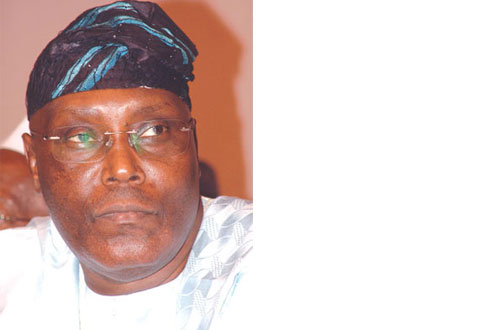 Nigeriaâ€™s presidential aspirant , Atiku Abubakar, has described the three and halfÂ  years of the Umaru Yarâ€™Adua-Goodluck Jonathan era as years of waste.

In an interview in London with Reuters, Atiku said ill-health prevented Yarâ€™AduaÂ  from achieving much and that the transition to the Jonathan period has â€œbeenÂ  messy.â€™â€™

â€œI would say, four wasted years,â€ Abubakar said.â€WHERE HAS THIS MONEY GONE?â€Â  Nigeriaâ€™s foreign reserves have fallen by 20 percent in the past 12 months, while aÂ  savings account for windfall oil revenues has dwindled from $20 billion in 2007 toÂ  less than $1 billion now, alarming economists.

â€œWith this administration, all of it has vanished and thatâ€™s why we keep askingÂ  â€˜where has this money gone?â€™ And we still have high exchange rate, high inflation,Â  high interest rates … and we donâ€™t see anything on the ground,â€ Abubakar said.

â€œMy approach would be to return to fiscal discipline, accumulation of comfortableÂ  foreign reserves and keeping the excess crude (windfall oil savings account) toÂ  actually invest in infrastructure and education,â€ he pledged.

Atiku promised to revive free-market reforms and fiscal discipline in Africaâ€™s topÂ  oil exporting nation after what he described as â€œfour wasted years.â€

Abubakar, who was vice-president from 1999 to 2007, is challenging PresidentÂ  Goodluck Jonathan for the ruling partyâ€™s ticket ahead of a presidential election inÂ  April. Whoever wins the party primaries is expected to be the next president.

â€œI will expand the scope of the reforms to make sure that we have a more friendlyÂ  environment for foreign direct investment,â€ Abubakar told Reuters in an interviewÂ  during a brief visit to London, in answer to a question on the banking sector.

Presenting himself as a champion of pro-market reforms during his time in office,Â  Abubakar said progress had slowed under the outgoing government and he would createÂ  new momentum.

He said he wanted swifter liberalisation of the oil industry, a break-up of theÂ  dysfunctional power sector into smaller entities that could more easily beÂ  privatised, and greater freedom for the Central Bank of Nigeria.

Abubakar tried to run for president in 2007 under the banner of the ruling Peopleâ€™sÂ  Democratic Party (PDP), but he and the then President Olusegun Obasanjo fell out andÂ  Abubakar was forced out of the PDP. He ran as an opposition candidate and lost.

The PDP candidate, Umaru Yarâ€™Adua, was elected but he died in May this year and theÂ  vice president, Jonathan, took over.

In the eyes of many northerners, the next president should be one of them so thatÂ  the north gets its full eight years. Abubakar is from the north, while Jonathan is aÂ  southerner.

Abubakar said that he would honour the agreement, meaning that he would stay forÂ  only one term before handing over to a southerner in 2015. He also pledged that ifÂ  Jonathan won the PDP primaries, he would accept the result and drop out of the race.

Asked why the rotation agreement should still hold more than a decade after the 1999Â  transition from military to civilian rule, Abubakar said it was for the good of theÂ  nation.

â€œWe havenâ€™t developed politically to the extent that you could throw the presidencyÂ  … to anyone who can grab it because what will emerge after that is that the majorÂ  ethnic groups will always continue to dominate the political power,â€ heÂ  said.However, he rejected the argument that ethnic sentiment was politicallyÂ  significant when asked about the Niger Delta, the violent andÂ  impoverishedÂ  oil-producing region in the far south.

Jonathan, an ethnic Ijaw from the Niger Delta, is the first person from that regionÂ  to become president in Nigeriaâ€™s 50-year history as an independent nation, and someÂ  analysts fear that if he loses the job after such a short term, it will causeÂ  unrest.

â€œThe Niger Delta is multi-ethnic and multi-cultural and his (Jonathanâ€™s) ethnicÂ  group is just one of several … I donâ€™t see a risk of instability, certainly not,â€Â  Abubakar said.