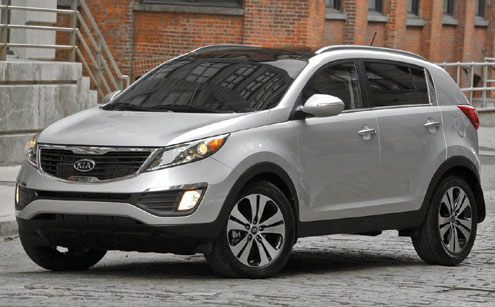 If someone told you a decade ago that some of the best-looking cars on the road inÂ  2010 would be Korean, youâ€™d have laughed hard. With a few exceptions, early KiasÂ  were unexciting. Kia brainstormed and poached Peter Schreyer from Volkswagen in 2006Â  and installed him as its Chief Design Officer. The same Peter Schreyer, who designedÂ  the iconic Audi TT.

The Kia Cerato and especially the two-door Koup launched in Nigeria before the exitÂ  of Chetan Mehan, the then Marketing Manager, showed that Kia had ditched itsÂ  unexciting styling and was ready to party. The new third-generation SUV yet to beÂ  introduced officially to the Nigerian market shows that Kia is really swinging.

Schreyerâ€™s philosophy has been to give the brand a recognisable â€œfaceâ€ with aÂ  signature grill called the Tiger Nose. In the new Sportage, this sexy nose isÂ  combined with LED lights, outlandish wheels and muscular styling to create a shapeÂ  that leaps at you. Apart from being better looking the Sportage is longer andÂ  slightly wider than its predecessor, and slightly lower too, giving it a more humbleÂ  stance. The cabin space is quite generous and four full-sized adults wonâ€™t findÂ  themselves involuntarily close to each other. Though itâ€™s not a full-bloodedÂ  offroader, ground clearance compared to its predecessor has reduced from 195mm toÂ  172mm.

According to Melissa Lewis, Marketing Manager, Dana Motors, to save fuel, theÂ  drivetrain by default delivers 100 per cent of engine torque to the front wheels inÂ  normal condition. With the AWD lock mode selected, the central diff lock distributesÂ  equal power between the front and rear wheels up to 40km/h, whereafter the AWD modeÂ  will deactivate. Following this, the system will engage the necessary wheel toÂ  assist in traction where needed. HAC (Hillstart Assist Control) prevents slip-backÂ  during stop-start driving up inclines, while DBC (Downhill Brake Control) maintainsÂ  a steady 8 km/h speed down steep slopes.