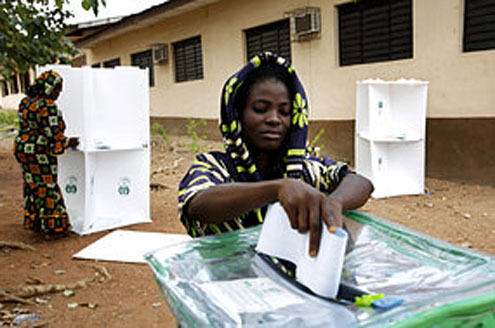 The much anticipated commencement ofÂ  voter registration exercise which will signpost the beginning of events leading to the 2011 general election may have hit a brick wall as a Federal High Court sitting in Abuja on Friday restrained the Independent National Election Commission, INEC, from continuing with the process of considering proposals of tendering or bidding for, producing, procuring, supplying or using of the Direct Data Capturing Machines or any other equipment ancillary to, or associated with the process and application of the said machines which are about to be supplied by three firms contracted by the electoral body to supply the machines for the exercise.

The order was granted as a result of an ex-parte application filed by Beddings Holdings Limited, a company which claims to be the patentee of the Patent and Design Rights number RP 16642 and Copyright Designs number RD 13841 relating to Electronic Collapsible Transparent Boxes (ECTBB) and patent right number RP NG/P/2010/202 in respect of Proof of Address System/ Scheme (PASS) (embedded with the concept of the coded metal plate) which are used for the collation and collection of the names, age, sex, address, finger print and every other bio data of every person resident in Nigeria together with the addresses and geographical description and location of various places in Nigeria both of which patents form the subject matter of the suit.

Beddings Holding Limited which specializes in the fabrication and manufacture of steel metal products such as transparent ballot boxes and collapsible polling booths, told the court that their patented product, PASS, is an authentic instrument and form of identity machine for the compilation, elimination and updating of voterâ€™s register by including the names of people who have attained voting age and deleting the names of those who have passed on to glory.

The company further averred that it is not claiming to have patent over the voter register per se or the Direct Data Capturing Machine, but the process of the application of the Direct Data Capture machines to obtain the names, age, sex, address, occupation, place of origin, and other bio data information from prospective voters which will eventually culminate in the final production of a comprehensive voterâ€™s register, infringes on its patent rights in and over the Electronic Collapsible Transparent Boxes (ETCBB) and the Proof of Address System/ Scheme (PASS) as provided in Law and this is irrespective of the generic name given to any component/computer/Laptop/ handheld or Data capture machine for such an exercise.

Counsels to the company led by Chief Asam Asam and Karinya Tunya, both senior advocates of Nigeria told the court that their client, by reason of its innovative and dynamic power of creativity over the years has become the single highest owner of patented products in Nigeria being bona fide patentee of about 22 patented products including the ECTBB and the PASS which is the subject matter of the suit.

They argued that the grounds of their exparte application is that the electoral body awarded contracts for the supply of the DDC machines to Zinox, Haier and Avante without first seeking and obtaining the written license, consent and authority of the patentee and urged the court to restrain the electoral body, its chairman and the three benefitting firms from going ahead with the execution of the purported contract through an interim injunction pending the hearing and determination of the motion on notice filed before the court so as not to deprecate the subject matter of the pending motion.

Consequent upon the submissions of the companyâ€™s lawyers and consideration of the affidavit in support of the motion ex-parte, Justice Ibrahim Auta proceeded to grant an interim order restraining INEC, Prof Attahiru Jega, the Attorney General of the Federation and the three benefitting companies from continuing with the process of acquiring the DDC machines for the registration of voters for the forthcoming 2011 general election or any other election whatsoever pending the hearing and determination of the motion on notice for interlocutory injunction filed before the court by Beddings Holdings Limited. He subsequently adjourned to 13th December for hearing of the motion on notice.