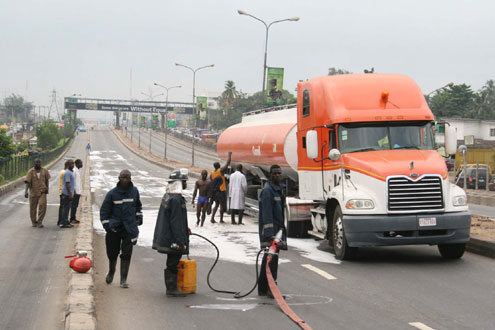 In the file: A fuel tanker

A part of the busy Ikorodu Road, Lagos State, South West Nigeria was partially closed today to avert another oil tanker fire disaster. The closure led to a traffic gridlock on the busy road..

The closure was caused by the breakdown of a Conoil tanker, with registration number XT 823 BDG coming from Yaba towards Ojota, which was leaking its content on the road. The leakge, P.M.NEWS gathered, was caused by a defective valve in the tanker.

The intensity of the leakage was so great that vehicles following the tanker had to maintain a distance to avert being caught in another fire disaster.

An oil tanker which spilled its content on the Lagos-Badagry Expressway yesterday resulted in an inferno which burnt over five vehicles and killed around 20 people.

The leaking oil tanker was halted at Obanikoro while LASTMA officers diverted traffic from the expressway to the service lane from Onipanu to Anthony in order to prevent a fire disaster.

A LASTMA officerÂ  told P.M.NEWS that they had to divert traffic to the service lane to avert another fire disaster like the one that happened at Alakija area on Lagos-Badagry Expressway yesterday.

The LASTMA officer added that the driver of the tanker said the valve of the vehicle was faulty and that a mechanic had been sent for to fixÂ  the leakage.

As a result of the incident, there was a serious traffic gridlock on the Ikorodu Expressway as all motorists, including the Bus Rapid Transit, BRT vehicles were diverted to the service lane, leading to the partial closure of the main road from Onipanu to Anthony.

Officials of the fire service were fully on ground and at alert to prevent any fire incident.

Meanwhile, following series of fatal accidents on Lagos State roads, the Lagos State Government is currently moving to check the excesses of tankers, trailers and articulated vehicles on Lagos roads.

Special Adviser to the Governor on Transportation, Mr. Kayode Opeifa lamented the loss of several innocent lives in two tragic accidents in the state within the last two days.

He said that most of these accidents involving trucks, trailers and articulated vehicles were caused as a result of rear and side impact on haulage trucks as well as poor visibility of the truck drivers.

â€œAccidents involving trucks have claimed a lot of lives who could not immediately see a slow moving truck or broken down truck at night or during rainfall and harmattan.â€

In a bid to reduce accidents on the roads, Opeifa said government would partner with Chevron and a coalition of road safety non-governmental organisations, NGOs to hold a road safety campaign with the theme Truck Safety: Time for Action.

He said this became necessary in order to ensure the safety of lives and property of road users and fulfill the recommendations adopted by the United Nations during the 2010 Safety World Conference held in United Kingdom.

Opeifa stated that as a measure to reduce the rate of accidents involving tankers and others, the truck safety campaign will be used to flag off the fixing of retro reflective tape on over 2,000 trucks plying Lagos roads.

This, he said, will make the tail of the trucksÂ  reflective at any time of the day, thereby reducing accidents caused by poor visibility.

Yesterday at Alakija area of Lagos, about 20 people were burnt to death when an oil tanker fell and spilled its content. This sparked aÂ  fire that razedÂ  five vehicles. Several people were injured in the incident.

On Wednesday night, about 10 people were killed when a bus had a flat tyre and somersaulted resulting in an inferno that consumed lives and property.