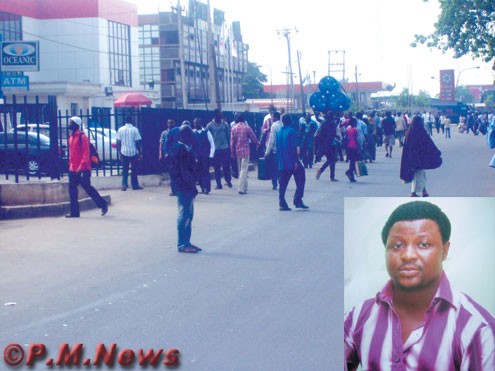 The police this morning closed a portion of the service lane on Ikorodu Road fromÂ  Fadeyi to Palmgrove to prevent youths from protesting the death of a SomoluÂ  resident, allegedly killed by a divisional police officer (DPO) at Olosan, Mushin,Â  Lagos.

The police took the action, P.M.NEWS gathered, to prevent the breakdown of law andÂ  order following information that the youths planned to march to Alausa, seat of theÂ  Lagos State government to register their grievances over the death of a dieselÂ  dealer, Femi Olayiwola, who was shot in his car early in the morning yesterday byÂ  the DPO of Olosan Police Station, Mushin.

The commander, Area â€˜Hâ€™, Mr. Godwin Nwobodo, confirmed the arrest of the policeÂ  officer yesterday to P.M.NEWS, adding that the matter will be investigated and theÂ  culprit charged to court.

â€œI am an Assistant Commissioner of Police. I cannot tell you any lie. The policemanÂ  that killed your brother is a DPO in Mushin, Olosan Police Station, and he has beenÂ  arrested. He is in our custody now. But I do not know why he killed the man,â€ heÂ  stated.

Investigations revealed that the 29-year old diesel dealer was in company ofÂ  hisÂ  brother, identified as Sunday and three others,Â  a man and two ladies, in theÂ  deceasedâ€™s Honda Odyssey car with registration number BX 714 KSF when he was shotÂ  dead.

They were said to be coming from a party when they noticed that a Camry car withÂ  tinted glasses was pursuing them. In the course of seeking refuge at Onipanu PoliceÂ  Station, the DPO allgedly moved closer to the deceased and fired bullets at him inÂ  the car, killing him instantly.

Speaking on the incident, elder brother of the deceased who identified himself asÂ  Ola said:â€ Yesterday, Femi told me that he was going to a party but because I wasÂ  too tired, I could not follow him.

â€œ I learnt that on his way back home this morning, he saw a Camry car with tintedÂ  glasses moving closer to him and he was afraid to stop. He ran to the Onipanu policeÂ  station for protection and there the DPO shot him dead.

â€œI heard people that were with him in the car said a policeman from Olosan policeÂ  station shot him dead.â€

Ola appealed to the Lagos government and the police to take necessary action againstÂ  the killer of his younger brother.

Wife of the deceased told P.M.NEWS that his husband was shot dead while coming fromÂ  a party.

â€œMy husband is not a thief. He went to a party with friends and he was killed justÂ  like that by a DPO. I want the government to help me find the killer of my husband,â€Â  Tamilore pleaded.

The elder brother to the deceased, Sunday, who was in the car with the deceased whenÂ  he was shot dead by the DPO, was speechless, when asked to comment on the incident.

A witness at the murder scene, Mr. M. A. Idowu, told P.M.NEWS that the incidentÂ  occurred around 5a.m. He saw some policemen blocking the service lane. In his questÂ  to know what was happening, he waited and the next thing he saw was that a fat manÂ  came out from his car and shot the man that drove a car in his front.

â€œI was at the bus stop about 5 a.m., going to Ketu when I noticed that someÂ  policemen blocked the service lane. I waited to see what was happening. The nextÂ  thing I saw was that a fat man came out from his car and shot the man in another carÂ  in his front.

â€œGovernment should hold this station (Onipanu Police Station) very wellÂ  known toÂ  the killer of the man,â€ he said.