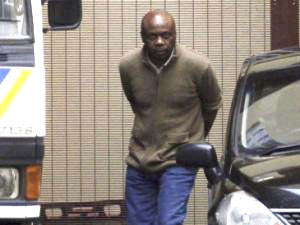 He may be shackled, but he is not silenced. From his prison cell in South Africa,Â  Nigeriaâ€™s militant leader, Henry Okah, is still promising bombs and gun fire to theÂ  Nigerian military authorities.

Okah, who is on trial in South Africa on terrorism charges, said thereâ€™s no militaryÂ  solution to the rebellion under way in the oil-rich Niger Delta.

â€œThere are thousands of people who are willing to fight and theyâ€™ll continue toÂ  fight,â€ Okah said in an interview with Bloomberg on December 5 after he calledÂ  Bloomberg from prison in Johannesburg.

â€œIf I can have access to weapons, Iâ€™ll give thousands ofÂ  weapons to people in theÂ  delta to defend their lives and their land.â€

His comments came as fighters of the Niger Delta Liberation Front ruptured aÂ  pipeline belonging to the state-owned oil company on Dec. 5, the group said in anÂ  e-mailed statement yesterday. MEND, which claimed responsibility for recent attacks,Â  said in an e-mail last week it was planning new assaults on the oil industry.

Okah, 45, was arrested in Johannesburg after two car bombs exploded in Abuja, onÂ  October 1, as President Goodluck Jonathan was marking Nigeriaâ€™s 50th independenceÂ  anniversary. The blasts were claimed by the Movement for the Emancipation of theÂ  Niger Delta, the main armed group in the oil-producing region that the governmentÂ  says Okah is leading.

Attacks in the delta by armed groups including MEND cut more than 28 percent ofÂ  theÂ  countryâ€™s oil output between 2006 and 2009. MEND wants the region to have exclusiveÂ  control of its resources, while paying tax to the central government.

While he denied being the leader of MEND, Okah said he has influence among variousÂ  armed groups, who, he said, â€œcall me master.â€

Angolan authorities arrested Okah, a resident in South Africa, in 2007 on suspicionÂ  of arms trafficking. He was later deported to Nigeria, where he was put on trial onÂ  62 charges, including capital offenses of treason and terrorism.

Okah was freed under an amnesty plan initiated in August last year by formerÂ  President Umaru Yarâ€™Adua and returned to South Africa. Jonathan succeeded Yarâ€™AduaÂ  after he died on May 5.

Even if rebel commanders surrender under the terms of the amnesty, others will takeÂ  their place, Okah said. â€œItâ€™s like gang warfare: When you leave your turf, otherÂ  people take over,â€ he said.

The Nigerian military has stepped up raids against militant camps in the past monthÂ  in response to a renewed surge in attacks by the rebels. The increased violenceÂ  followed a period of relative calm when thousands of fighters disarmed under theÂ  amnesty.

â€œThe military should have a better way of dealing with the individuals theyâ€™reÂ  seeking,â€ Nnimmo Bassey, the Executive Director of Environmental Rights Action, aÂ  Nigerian non- governmental organization, and chairman of Friends of the Earth.

â€œEntire communities are being targeted and punished. When an individual is wanted, aÂ  whole community shouldnâ€™t be punished.â€

Military spokesman, Colonel Timothy Antigha, denied civilians were being targeted,Â  saying in a December 2 phone interview that â€œa civilian has no business in a campÂ  where there are machine guns, anti-aircraft weapons and dynamite.â€

While both Okah and Jonathan are ethnic Ijaws, the dominant ethnic group in theÂ  region, Okah said the Nigerian president lacks the vision to manage the grievancesÂ  of different parts of Africaâ€™s most populous nation.

â€œThe Niger delta is just one part of the country; everybody in Nigeria hasÂ  grievances,â€ he said. â€œCan Jonathan manage all these grievances? The answer is no.â€

â€œOkah is talking nonsense, all heâ€™s looking for is an avenue to sell his weapons,â€Â  he said. â€œEven as vice president, the president was the one driving the amnestyÂ  process under Yarâ€™Adua.â€