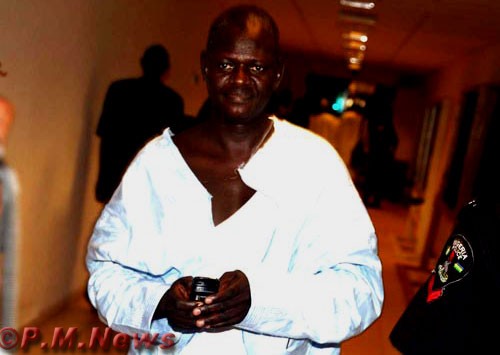 Dino Melaye, the leader of the five progressives in the House of RepresentativesÂ  whose suspension was voided by an Abuja High Court last week was refused entry intoÂ  the National Assembly this morning.

The House of Representativesâ€™ member who arrived at the gate of the NationalÂ  Assembly around 10 a.m. was barred from entering the National Assembly as the gateÂ  to the sprawling complex was locked against him. Dino however left and according toÂ  reports briefly blocked the entrance to the lawmaking building with some vehiclesÂ  later.

There were reports that he may have been arrested by the Police, though this cannotÂ  be confirmed as at the time of writing this story.

It will be recalled that the leadership of the House of Representatives had filed anÂ  appeal against last weekâ€™s judgment which was in favour of Dino and his group.

The offices of the Kogi State lawmaker and those of his colleagues have also beenÂ  allocated to other legislators. Attempt by Dino yesterday to eject the new occupantÂ  of his office, Buba Jubril was not successful.

Dino and members of his group were suspended following the fracas that broke out onÂ  June 22 over allegations by the Progressives that the Dimeji Bankole-led leadershipÂ  of the House of Representatives mismanaged N9 billion capital vote.