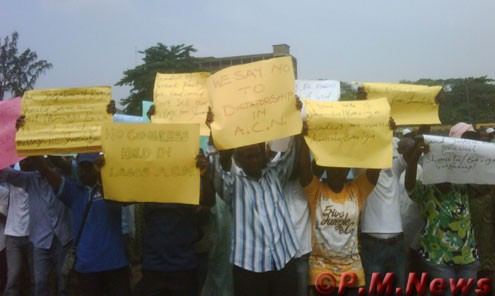 Over 500 supporters of the Action Congress of Nigeria, ACN, in Lagos State, SouthÂ  West Nigeria yesterday stormed the partyâ€™s secretariat on Acme Road, Ogba to protestÂ  the alleged manipulation of the partyâ€™s ward and local government congresses.

The supporters, drawn from the various local governments and local councilÂ  development areas of the state, carried placards and demanded that the ward and LGÂ  congresses, which had already been held, should be cancelled to give room for freshÂ  ones.

Some of the placards carried by the protesters read: No Imposition of FictitiousÂ  Names, Give us Fundamental Human Rights and Not Animal Rights; Stop all UndemocraticÂ  Processes in Lagos State; ACN, Democracy Must Rule; Stop Acts of PoliticalÂ  Dictatorship and We want Democracy, Not Autocracy.

Spokesperson of the protesters, Engr. Adebayo Akande said â€œwe donâ€™t wantÂ  continuation of imposition. We want open primaries.Â  Two weeks ago, we were given ACÂ  cards and not ACN cards. At the congresses, names of executive members were smuggledÂ  out and new names smuggled in.

â€œWe donâ€™t want to resort to self-help. In Lagos State, things are not what they areÂ  supposed to be. We want the congresses held so far to remain null and void.Â  TheÂ  congresses were secretly held. We want transparent congresses.â€

Akande stated that the congresses held in the 377 wards were manipulated to suitÂ  certain persons, and that in most wards, congresses were not held, but manipulatedÂ  for unscrupulous purposes while some people were schemed out.

â€œWhy should names of current executive members be removed in order to satisfyÂ  certain persons,â€ he queried.

The protesters demanded that the ACN card be regularized in Lagos State so that manyÂ  people would not be deprived of their rights to vote at congresses, and that allÂ  congresses already held be nullified.

â€œWe want fresh congresses to be held across the state and we also want openÂ  primaries to be held and such primaries must be certified by the National ExecutiveÂ  Council of the party,â€ Akande stated.