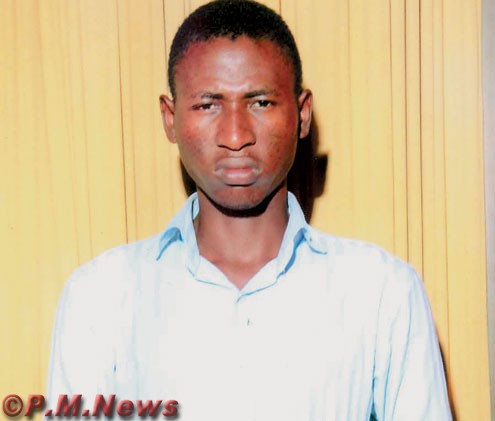 â€¢The alleged gunman after his arrest.

There seems to be no respite for Prophet T.B. JoshuaÂ  of The Synagogue Church of AllÂ  Nations, as another personÂ  was caught inside the church on Sunday. He had come withÂ  a loaded gun which he hid before he joined the congregation.

His true intention could not be ascertained as the man claimed after his arrest thatÂ  he had come to seek repentance.

Before the latest incident, a knife-wielding man was arrested among the congregationÂ  two Sundays ago.

P.M.NEWS gathered that the arrest was madeÂ  while T. B. Joshua was ministering inÂ  the church. In the course of his ministration, he stated that someone with a gun wasÂ  inside the church. As the pastor moved towards the suspect, the suspectÂ  confessedÂ  that he was the one that came with the gun and he took Joshua and security personnelÂ  to where he kept the weapon.

The suspect, it was learnt, hid the gun somewhere in the church and was going toÂ  retrieve it when he was accosted by Prophet Joshua who suspected that he was up toÂ  something in the light of the botched knife incident.

P.M.NEWS gathered that since the knife incident, Joshua had beefed up securityÂ  around the church to ward offÂ  intruders.

The newÂ  suspect, Sunday Akpan, said he actually came to the church because he wasÂ  tired of robbing people.

Akpan said he joined a robbery gangÂ  when one of his friends, who is now dead,Â Â  initiated him into the business and since then, he has been involved in severalÂ  operations.

On why he joined the robbery gang, he said it was because of bad friends and that heÂ  was from a poor family and his parents are old, so he needed to take care of themÂ  and his wife and child. He expressed regrets for being a robber and said that heÂ  wanted to change.

â€œI have been involved in several robbery operations, but for all the years, there isÂ  nothing to show for it. I cannot boast of a roof where I can sleep,â€ he lamented.