LAGOS GOV RACE: I Have Not Anointed Anyone, Says Tinubu 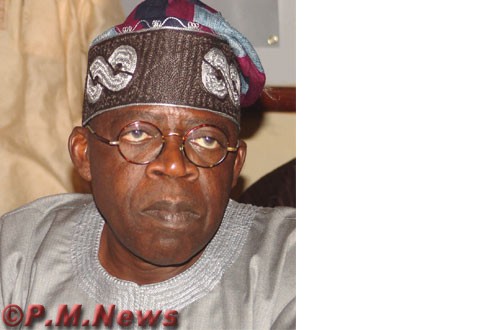 As governorship aspirants under the banner of the Action Congress of Nigeria (ACN)Â  warm up for the Lagos Government House in 2011, former governor of Lagos State,Â  Asiwaju Bola Tinubu, has declared that he had not anointed anyoneÂ  for the covetedÂ  seat.

The former governor stated emphatically that he could not singlehandedly pick aÂ  governorship candidate for the party in Lagos State.

His response puts paid to the impression created by some politicians that he hadÂ  thrown his weight behind one of the aspirants jostling to be governor of the state.

The former governor, who was on a visit to the State House of Assembly, Alausa,Â  yesterday, was asked who his anointed candidate for Lagos State was and he said: â€œIÂ  am not into that, I am not a pastor. I donâ€™t have the anointing oil or the spiritualÂ  power.

â€œI am just a party leader and leadership is about collective decision process.Â Â  You too have the right of endorsement; you have the right to be in position ofÂ  influence.â€

Tinubu also said he was not disturbed by those who were allegedly threatening hisÂ  life, adding that he was used to such threats, having faced graver situations duringÂ  the military era.

â€œThis is not the first time I am facing such a threat. I have been in it sinceÂ  1991, 1993 and 1994 during the military dictatorship and our crusade to bringÂ  democracy to the country,â€ he said.

â€œIf those so-called opponents are becoming a danger and we all become afraid toÂ  lead the crusade for full democratisation, for true federalism, for justice in ourÂ  society, then we are finished as a nation,â€ he added.

Tinubu also saluted the bravery of the Governor of Central Bank of Nigeria, LamidoÂ  Sanusi, for defending the cause of democracy when he accused members of the NationalÂ  Assembly of consuming 25 percent of the nationâ€™s budget.

He described the lawmakers as greedy and called on ACN lawmakers in the NationalÂ  Assembly not to join the crusade against Sanusi for saying the right thing.

The former governor who spoke at a four-day training conference for localÂ  government legislators at the Eko FM Multi-Purpose Hall, Ikeja, Lagos, said theÂ  lawmakers, who constitute 0.01 percent of the population should not be so greedy asÂ  to take more than one percent of the budget.

He commended Sanusi for exposing the greedy lawmakers, adding that he was proud ofÂ  him.

In his address to the councillors, Tinubu admonished them to examine themselvesÂ  always so that they can serve the people better.

â€œIf you must be people-focus, there must be accountability, soul searching andÂ  accountability. Government programme must fit the needs of our people.

â€œYou must not be an overbearing executive in any part or arms of government. TheÂ  legislators at the grassroots are not there to bake cake or take slices from theÂ  bread of our state, they are there to serve the people. And if it is all aboutÂ  service, then, they have to show commitment to the people,â€ he stated.

Tinubu also expressed his support for separation of powers in a democracy but warnedÂ  that it should not be abused. â€œWe must not abuse it. There is no way anyone can stopÂ  you from performing your constitutional duty. We must salute all arms of ourÂ  government in the state for the exemplary format today,â€ he said.

He urged the councillors to continue to ask questions on, â€œhow long have weÂ  reviewed the revenue allocation formula? How frequent is the period recommended byÂ  the constitution, and if is in every five years, has there been changes in theÂ  environment, population and the needs of the society?â€