NPL Referees Must Brace Up 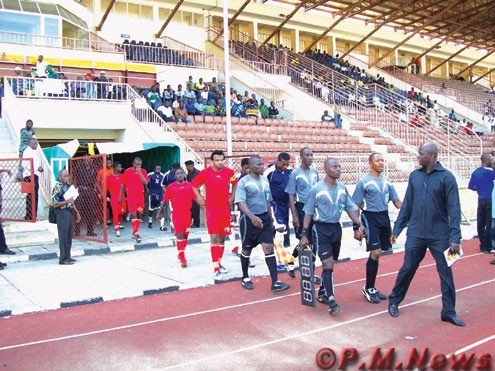 Referees lead out the players of Sunshine Stars of Akure and Rangers International of Enugu before their week four match at the Ijebu-Ode Stadium, Ogun State, Nigeria two weeks ago. Photo: TUNDE OYEDELE.

There is no doubt that the Davidson Owumi-led Nigeria Premier League, NPL, isÂ  charting a new course, which would reposition the League for better from itsÂ  troubling years.

At least, the Nigerian League is attracting positive attention from local,Â  international investors and stakeholders now.

However, while the league is gradually picking up in areas like â€˜television friendlyÂ  turf,â€™ attendance, prolific play by participating players and clubs, merchandisingÂ  etal, same cannot be said of the officiating of the league.

Feelers from Abuja say the assessment reports of some referees, who handled topÂ  matches of the five weeks old league season, scored the whistle men below average.

While a few of them are seen to be very mobile, many, according to reports areÂ  struggling to come to terms with the pace of the game.

They are not close to the action most of the time, which prevents them from takingÂ  accurate decisions during crucial matches.

What this means is that the referees need to raise their work rate to catch up withÂ  the new order. The Referees Committee has a duty to do, especially in the area ofÂ  fitness.

Their inaccurate decisions showed clearly with several protests that greeted some ofÂ  the matches played so far across the nation. The whistle men now have enoughÂ  security to do their job without fear or favour.