NFF To Siasia: Get Down To Business 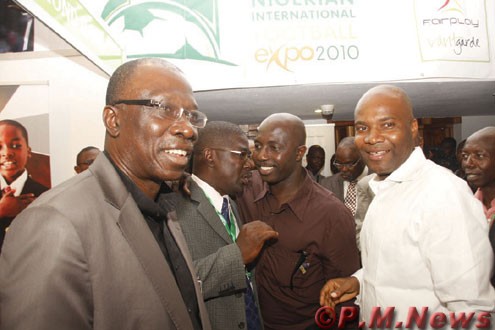 The newly appointed Chief Coach of the Super Eagles, Samson Siasia has been told toÂ  get down to serious business after his unveiling in Abuja on 1 December.

Acting Secretary General of Nigeria Football Federation, NFF, Musa Adamu, said theÂ  enormousÂ  work on the shoulder of the former Nigerian international will not allowÂ  him the luxury of celebrating his appointment as the coach of the senior nationalÂ  team.

â€œSiasia needs to do a lot of behind the scene works to get himself in position forÂ  the task ahead. He has to sit down and watch video clips of past matches of theÂ  teams and some of our players in both the local and foreign leagues. I donâ€™t thinkÂ  he has enough time to celebrate his appointment. It is better for him to sit downÂ  and do the job now,â€ he said.

Meanwhile, Siasiaâ€™s much anticipated trip to Europe to meet with some players of theÂ  Eagles is not certain.

Speaking yesterday at the Sheraton Hotels, Lagos, venue of the NigerianÂ  International Football Expo, Siasia said the NFF is still working out the modalitiesÂ  for the trip, adding that availability of funds will determine the next line ofÂ  action.

He also disclosed that the Eagles will henceforth be making use of the FIFA FreeÂ  days starting from the one in February next year.

He disclosed that preparations for the remaining Nations Cup qualifiers will beginÂ  in January with the home-based players resuming camping ahead of the friendly andÂ  the qualifying match against Ethiopia in March, 2011.