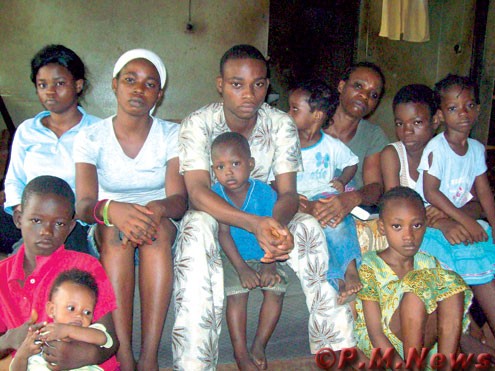 Tragedy struck at Ebute-Metta, Lagos State, Southwest Nigeria at the weekend whenÂ  two members of the Neighbourhood Watch of Nigeria attached to the Lagos MainlandÂ  Local Government Area, were killed while on duty.

Those killed by the unidentified gunmen were Chief Ade Rotimi Adebowale Fakoya, theÂ  commander of the group in Ebute Metta and Comrade Fatai Hussain.

P.M.NEWS gathered that the deceased were on patrol when the assailants confrontedÂ  them and shot them to death at the Ibadan/Osholake junction, Ebute-Metta.

Comrade Olusegun Adebojo, a member of the Neighbourhood Watch, who was at scene ofÂ  the incident, described their killing as assassination.

According to him, â€œthe commander was on patrol. He was checking other members onÂ  duty. When he got to my house, I told him to wait for me because I was fetchingÂ  water, but as I was coming back, I saw a car and three persons with guns came downÂ  and said â€˜this is the man.â€™ They fired him and the other person that was with him.

â€œThe men pursued me but I hid myself in an uncompleted building. After they hadÂ  killed them, one of them said, â€˜sebi you wan be commander, yeye man, go and be theÂ  commander now.â€™

â€œAfter they had gone, I came out of the building and called other members to comeÂ  and see what happened.â€

â€œWhat happened is a clear case of assassination. From what we saw at the scene ofÂ  the incident, it shows that the men were assassinated and we want the government andÂ  the police to investigate it and bring those behind it to book,â€ Ekundayo stated.

At the late Fakoyaâ€™s house on 28, Osholake Street, Ebute-Metta, his wives, AdenikeÂ  and Oluwabunmi, with their ten children were seen wearing mournful looks.

Deji Fakoya, 21, the first child of the late commander, described his father as anÂ  easy going man who loved everybody.

A resident of the area called on the government to demolish the shanties at theÂ  Ebute area of the community to forestall a future occurence.

P.M.NEWS also gathered that the corpse of the men have been deposited at the IsoloÂ  General Hospital mortuary.