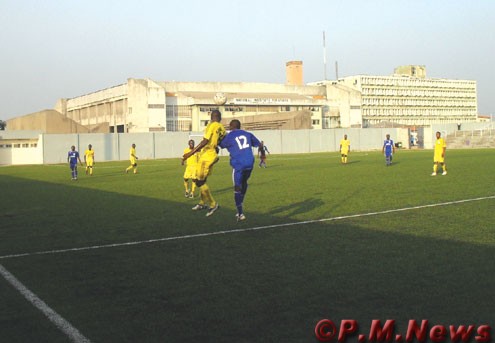 â€¢GRITTY...Players of Ajeromi Ifelodun and Ejigbo FC tango in an aerial battle during last weekendâ€™s match. Some matches would hold today.

The question that would be on the lips of soccer fans when Oshodi confront IfakoÂ  Ijaiye in League C would be, can fourth-placed Oshodi dislodge Ifako Ijaiye, who areÂ  currently placed second on the log.

After playing eight matches each, Ifako Ijaiye will seek to improve their standing,Â  but failure could spell doom on their chances of moving to the top of the log.

Second-placed Ifako/Ijaiye are a very hard working and compact team and credit mustÂ  be given to them for their free-scoringÂ  ability which has seen them scoring a totalÂ  of 27 goals, the highest number of goals for any of the teams in League C.

The defenders of Oshodi will have to contend with the lethal partnership of SamsonÂ  James and PaulÂ  Henry Onoka. Both players have been able to give the defenders ofÂ  their previous opponents nightmare and only time would tell if the defenders ofÂ  Oshodi would have what it takes to tame them come tomorrow.

Henry has sixÂ  goals to his credit and will seek to increase his goals tally butÂ  would be depending on his understanding with Paul. Henry, who has been the cynosureÂ  of the fans at the Legacy Pitch with his blistering runs and penchant for goals,Â  seems comfortable with grabbing the headlines.