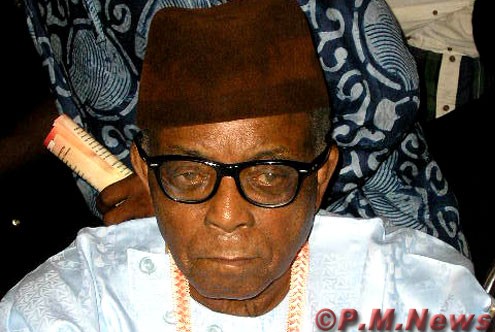 Frontline nationalist and statesman, Pa Anthony Enahoro is dead. He was 87.

Alfred Ilenre, aÂ  close political ally of the late politician wept this morning asÂ  he told P.M.NEWS that Pa Enahoro died at the University of Benin Teaching Hospital,Â  where he was rushed after his fragile health got worse.

Many Nigerians who learnt of the death of the elder statesman this morning thankedÂ  God for his life, saying he lived a fulfilled life worthy of emulation..

â€œHe was the icon of restructuring in Nigeria. He trained us to fight for theÂ  progress of this country. He was the strongest nationalist ever.

â€œHis death is unbelievable to us and it is very destabilising. We will continue toÂ  fight for what he believed in. He taught us a lot of things in the struggle to makeÂ  our nation better and we will remember them,â€ he said.

Lagos lawyer, Festus Keyamo, also lamented Enahoroâ€™s demise, saying he was the lastÂ  of the pre-independence nationalists to pass away. He wished him a happy rest.

According to him, Enahoro had paid his due. â€œIt is unfortunate that he did not liveÂ  to see the Nigeria of his dream,â€ he added.

Human rights activist, Bamidele Aturu, described Enahoroâ€™s death as sad andÂ  unfortunate, saying: â€œWe will miss him. He wrote his name in gold when he moved theÂ  motion for Nigeriaâ€™s independence in 1953. I condole with his family.â€

National President, Campaign for Democracy, Dr. JoeOkei-Odumakin said: â€œWe mourn theÂ  passing away of Enahoro. His death is a great loss to the human rights movement inÂ  Nigeria. He struggled for the rule of law and the promotion of democracy.

â€œOur regret is that a new Nigeria still remained in the offing till he died. We willÂ  continue the stuggle from where he stopped. May his soul rest in peace.â€

Founder, Coalition Against Corrupt Leaders, Comrade Debo Adeniran, describedÂ  Enahoroâ€™s death as a serious blow to the struggle for a new society. â€œEnahoro wasÂ  the father of Nigeriaâ€™s independence.

â€œHe started the stuggle to free us from the colonial masters. His dreams could notÂ  be realised in his lifetime. We must stand up for his ideals and reject unworthyÂ  leaders. We will for ever remember him,â€ he stated.

He was born in Uromi, Ishan, Edo State on 22 July, 1923. He later became an EdoÂ  traditional title holder of Adolo of Uromi.

He attended Government Schools in Uromi and Owo and later Kingâ€™s College, Lagos.

At the age of 21 in 1944, he became the youngest editor till date when he edited inÂ  Ibadan, Southern Nigeria Defender.

On the political front, Chief Enahoro was a foundation member of Chief ObafemiÂ  Awolowo-led Action Group political party. From 1950-53, he was Minister of HomeÂ  Affairs, Transport and later Information of the Western Region and Mid-West AffairsÂ  leader of the House from 1954 â€“1959.

Chief Enahoro was the Publisher/Chairman of World Publications Limited, publishersÂ  of Sunday World, The Weekender and Womanâ€™s Vista magazine based in Benin City.

During the struggle for Nigeriaâ€™s independence from Britain in the 1950s, EnahoroÂ  attended all constitutional talks preceeding her independence in October 1, 1960.

On 31 March, 1953, he rattled the British colonical masters when he moved theÂ  historical motion for Nigeriaâ€™s independence at the London constitutionalÂ  conference.

During the emergency period in the Western Region in 1962, he went into politicalÂ  exile in the U.K. He was extradited and became what he called a â€˜fugitive offenderâ€™Â  in his memoir of the regionâ€™s political crisis.

Aged 87, Enahoro was the Chairman of the National Democratic Coalition, NADECO, theÂ  group that pushed the late military dictator, General Sanni Abacha out of power.

Alongside NADECO chieftains like Pa Adesanya, Ayo Opadokun, Enahoro was tear-gassedÂ  in December 1995. He broke down.

When the hassles died down, Pa Enahoro later told journalists: â€œI wept. Yes, I weptÂ  for a country that does not know that her citizens have a right to live.â€

The late nationalist was reported to have problems with his breathing on Monday, 1Â  November this year. He was rushed to the intensive care unit of the University ofÂ  Benin Teaching Hospital for medical attention. The rumour mill then went to townÂ  that the foremost nationalist had passed on.

Though his admission into the hospital was confirmed to journalists by a familyÂ  source who spoke under the condition of anonymity, the authorities of the UBTH andÂ  the Edo State Government denied the death story, confirming that Enahoro wasÂ  hospitalised but he was still alive.

He made his last appearance while alive on the front pages of newspapers on 2Â  November, 2010.