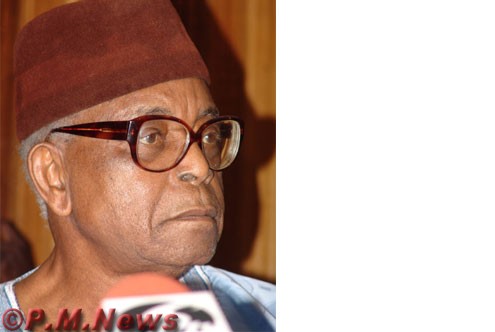 More Nigerians have continued to mourn the passage of elder statesman andÂ  nationalist, Pa Anthony Enahoro, 87, who died in the early hours of yesterday at theÂ  University of Benin Teaching Hospital, Benin City, Edo State, where he was rushed toÂ  when his health deteriorated.

The leader of the Bafarawa Movement and a presidential aspirant of the ActionÂ  Congress of Nigeria, ACN, Attahiru Bafarawa, in his statement on the death ofÂ  Enahoro, described him as a humanitarian and a fighter for the oppressed.

The former Sokoto State Governor stated: â€œIt is with great shock that I received theÂ  passing of this wonderful man, a frontline statesman, a father, humanitarian andÂ  fighter for the oppressed, Chief Anthony Enahoro.

â€œIt is sad that though Enahoro passed on at the ripe old age of 87, those of us whoÂ  knew him would have wanted him around as the nation navigates this tortuous balanceÂ  on the precipice.â€

â€œMay I, on behalf of my family, the Bafarawa Campaign Organization and The BafarawaÂ  Movement pray that Allah forgives our dearly beloved chief all his sins and grantÂ  him eternal rest.

â€œWe shall miss him but God who gives, knows why he is taking Chief Anthony EnahoroÂ  now. His family should find comfort in the fact that Chief Enahoro served NigeriaÂ  and humanity most of his adult life. Such is the life that we must all emulate,â€ heÂ  said.

Former Governor of Kaduna State,Â  Alhaji Balarabe Musa said he was sad by the deathÂ  of Enahoro, saying the nation has lost a gem.

â€œHis death is a great loss to Nigeria . He lives a life of struggle to liberateÂ  Nigeria and he should be remembered for that. I condole with his family,â€ he stated.

In his letter to the widow of Pa Enahoro, Mrs. Helen Enahoro, Fashola noted that theÂ  political icon â€œbestrode the political landscape of our dear country for over sixÂ  decades. He was selfless and committed to the cause of true federalism and a strong,Â  united, prosperous Nigeria .

â€œThe political history of Nigeria is incomplete without the name of Chief AnthonyÂ  Eromonsele Enahoro. As a thoroughbred journalist, he constantly walked the path ofÂ  fire in his commitment to the cause of political freedom and emancipation of ourÂ  people from colonial rule.

â€œThe elder statesman would be fondly remembered for his forthrightness, candor andÂ  courage as well as his principled stand on national issues He was a greatÂ  nationalist who was welcomed in any home in Nigeria. During the unforgettable andÂ  momentous period in the history of our struggle for democratic governance, weÂ  remember his leadership of PRONACO and NADECO.â€

â€œHe will be fondly remembered for his forthrightness, candor, courage and principledÂ  stand on national issues. He will be missed by the progressives, the catholicÂ  church, the media and Nigerians. Indeed, Papaâ€™s death signals the end of a gloriousÂ  era in the history of our beloved country. His life serves as a source ofÂ  inspiration for the rest of us, the younger generation of Nigerians, on commitmentÂ  to nation building and the commonwealth of the people,â€ Fashola added.

Also, the Pro National Conference Organisation, PRONACO which was founded by EnahoroÂ  celebrated his passing away, saying: â€œWe recall with fond memories the role thisÂ  indefatigable nationalist played when he moved the motion for Nigeriaâ€™s IndependenceÂ  in 1953.

â€œThe exemplary leadership Pa Enahoro provided for the peopleâ€™s resistance againstÂ  gangsterism in our country as the leader of the National Democratic CoalitionÂ  (NADECO) and PRONACO stands him tall among the genuine few heroes we can be proudÂ  of.â€

A statement issued by the organization revealed that Enahoroâ€™s entire life wasÂ  devoted to extending the frontiers of democracy and freedom of the rule of law,Â  stressing that uppermost in his crusade was the agitation for a just and properÂ  federation which did not materialize till he died.

â€œChief Enahoro during his life time fought so many battles for the people ofÂ  Nigeria, among which was the struggle and motion for Independence in 1953, theÂ  formation of NADECO and the ousting of the of the military from governance in 1998Â  and the establishment of PRONACO and presentation of alternative peoplesâ€™Â  constitution for Nigeria in 2007.