Tripp J Plus: New Kids On The Bloc 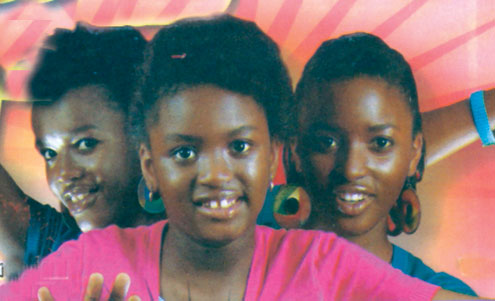 Bouqui, a gospel and inspirational hip-hop star, who discovered the trio, statedÂ  that â€œthe girls are so talented, there is nothing as fulfilling as finding andÂ  nurturing new talents and watching them rise to fame.â€

Bouquiâ€™s new girls are known as Triple J Plus.

The oldest of the sisters is JT, who was born in 1994. She is an intending fresh manÂ  at Oral Roberts University, USA and likes dancing, cooking and travelling. JP, onÂ  the other hand, is 15 years old. Her hobbies include singing, basketball andÂ  creative arts. The youngest, JJ, is eight years old and she likes drawing, makingÂ  friends and dancing, while the colour she likes most is red.

Bouqui said she took to the sisters after she was floored by their raw talent,Â  energy, passion and dedication.

Her involvement in this project will be no surprise to her long-time fans, who haveÂ  known the rapper for dipping her feet in new territories and immersing herself inÂ  new challenges.

As a young child, she discovered her passion for music and in her teens, formed theÂ  all-female group, G-Vibes. She also branched into broadcasting by presenting on EkoÂ  FM.

Two years after the release of her first album, Bouqui released the second,Â  Redefinition, which further cemented her as one of the most famous female acts inÂ  the country. Her first single, Mo Ri Le, was an instant hit, followed up by anotherÂ  successful single, Take You Away. An energetic live performer, the rapper went onÂ  the road and toured extensively in the UK, US and Nigeria in 2009 and the betterÂ  half of 2010.

Now, sheâ€™s taking time off her crazy schedule to present Nigerians a worthy gift:Â  three amazing gifted sisters for the prize of one.

JP adds: â€œWe were a part of a music competition organised by AKBC in Uyo three yearsÂ  ago, where we came fourth. We are sure our music will cut across the youngerÂ  generation as we pass across, messages that they can relate to.â€

Bouquiâ€™s main focus is on developing and nurturing Triple J Plus into a full-fledgedÂ  act that can stand the test of time.