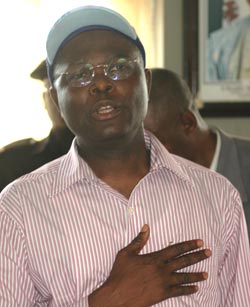 As the Federal Executive Council, FEC meets today at the Aso Rock Abuja, the Minister for Sports and Chairman National Sports Commission, NSC, KwaraÂ  State-born Ibrahim Bio will hit the venue with his letter of resignation from President Goodluck Jonathanâ€™s cabinet to return to his first love: politics.

The former Speaker of the Kwara State House of Assembly on Monday declared his ambition to contest as governor of the state of his birth.

With his intent to contest as the number one citizen of his state and with his resignation from the cabinet the next thing on the agenda would be, whoÂ  succeeds him as Nigeriaâ€™s Sports Minister?

The questions now on the lips ofÂ  sports enthusiasts are; will President Jonathan appoint another minister with just three months to next yearâ€™s generalÂ  election or will Nigerians be fed with another grey horn? Will the new sports minister be a minister of football as the country witnessed in the past?

Bio, who succeeded Eng. Sanni Ndanusa, recorded some achievements and was also enmeshed in some controversies like the impasse that engulfed the NigeriaÂ  Football Federation, NFF, during their election in August. However, his successor will have to be up and doing to either equal or surpass his predecessor.

As the post becomes vacant from today, sports enthusiasts have been commenting over who should be named as Bioâ€™s successor. First to comment was elder sportsÂ  critic, Martins Osaile. Osaile, who is known within the sports arena as â€œNigeriaâ€™s Don Kingâ€ in a chat with Brila f.m. advised President Jonathan not toÂ  appoint a new sports minister. He said the timeframe between Bioâ€™s resignation and next yearâ€™s election is too short.

He counselled the president to take a cue from what former President Olusegun Obasanjo did before his re-election. The former boxing promoter said thatÂ  instead of appointing a new sports minister, he should appoint a Permanent Secretary prior to next yearâ€™s election.

Another sports enthusiast and CEO of Miracle Beach Sports Club, Oladele Pius, is of the view that it doesnâ€™t matter when a new minister is appointed, but heÂ  should be someone who is grounded when it comes to sports administration.

â€œWe donâ€™t want somebody who would channel all our resources to football while other sports will suffer. We want a complete sports administrator who can helpÂ  develop our sports generally,â€ he said.