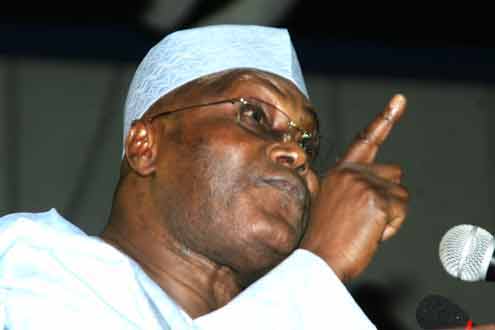 The Abubakar Atiku campaign for the presidency is tottering in the wake of several deadly blows the former vice president received in the past 24 hours.

But the campaign organisation will not admit it yet that matters are on the downside, about three weeks to the presidential primary of the ruling Peopleâ€™sÂ  Democratic Party. The most punchy of the blows was delivered by Governor Sule Lamido of the North Eastern state of Jigawa, who deflated Abubakarâ€™s claim toÂ  being the candidate of the North, by openly declaring support for President Goodluck Jonathan.

Lamido, an Obasanjo ally, said in Dutse that for the sake ofÂ  peace and tranquilityÂ  in the PDP, the candidature of President Goodluck Jonathan must beÂ  supported by all and sundry within the party.

Lamido disowned Atiku as theÂ  consensus candidate of the North, saying: â€œWe are talking of who will be the president of Nigeria under the platform of the PDPÂ  and therefore, we are not party to the so-called consensus candidate, because the issue is a party affair not a sectional or regional matter. Whoever emergesÂ  will be the president of the whole country not a particular section or region.”

As if this was not enough disappointment for the Atiku camp,Â  itâ€™s campaign coordinator in the state, Alhaji Saleh Ahmed Danzomo jumped ship and pledgedÂ  allegiance to President Goodluck Jonathan campaign team. Danzomo appeared to be taking his cue from the position of his boss. As he told reporters, he cannotÂ  see himselfÂ  workingÂ  forÂ  another candidate against the interest ofÂ  the state Governor.

â€œI can not be a hypocrite; my boss pledged his allegiance to Jonathan and myself going to another side. Since Lamido has expressed his support to Jonathan,Â  it means I have no other optionÂ  than to dump Atiku campaign organization and join the same pathÂ  with my boss.â€

Lamido explained why he has to dump Atiku: â€œWe resolved as a party to uphold our victory of 2007 by further supporting Goodluck ticket in 2011. He is ourÂ  own and we cannotÂ  disown him. If anybody feels he has a candidate, let itÂ  be, but we, in the PDP, our own is Goodluck. Here is a serving president underÂ  our party platform, so what moral justification do we have to replace him with some one else?â€™â€™

According to Lamido,Â  â€œAtiku has abandoned the party at a point and fought it, why is he now coming back to ride on its back to attain his ambition.”

In a reaction to the bad developments from Jigawa, spokesman of the Atiku Campaign Organisation, Mallam Shehu Garba told P.M NEWSÂ  this morning that DanzomoÂ  left the Atiku campaign because he was not chosen to be the coordinator of the campaign in the state, following the merger of the campaign structures of theÂ  four candidates that agreed to anoint Atiku as the consensus candidate.

â€œThe coordinator for Babangida was chosen to carry the mantle. Apparently, this gentleman was hurt by that decision.â€™â€™

”Lamido is actually opposed to Northern presidency at this time because he wants the office in 2015. His deal with Jonathan is on the basis that JonathanÂ  will back him for presidency after two terms as governor,” Garba said.Â  But Jigawa is not the only worry of the Atiku campaign as Niger State, the home ofÂ  Ibrahim Babangida, appears too to have chosen to dump Atiku for Jonathan. Deputy governor of the state, Ahmed Ebeto stated the political position of theÂ  state at a forum of North Central states backing Jonathan.Â  He said since Babangida had dropped out of the race, the state had since shifted to Jonathan. TheÂ  state, he said, does not recognize the consensus candidate picked by the North.

In the last 48 hours, President Jonathan has been gathering endorsements from various geo-political zones of the country, making him the front-runner in theÂ  race for the partyâ€™s nomination on January 13, if all the pledges materialized at the convention ground. But Atiku too has been wooing the same delegates andÂ  believes he will upset Jonathan.