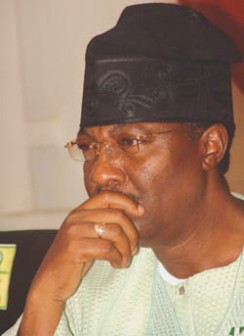 The crisis rocking the Peopleâ€™s Democratic Party, PDP, in Ogun State, South West Nigeria, deepened yesterday as a faction of the party held ward congressesÂ  across the state to form a parallel administration against the existing executive council led by Chief Joju Fadairo.

The congresses, which were trailed by accusations and counter-accusations from party stalwarts, may undermine the fortunes of the party in the state as someÂ  of its leaders have threatened to defect to the leading opposition party, the Action Congress of Nigeria, ACN.

P.M.NEWS findings across Ogun State revealed that the ward congresses were held simultaneously in all the 236 wards in the state.

Speaking with our correspondent, some of the party stalwarts expressed the fear that the PDP may lose Ogun in the next general elections.

A governorship aspirant in the state on the ticket of the PDP and also former chairman of Yewa North Local Government, Evangelist Olusoji Eweje, however,Â  dispelled this fear.

He maintained that the party under the Joju Fadairo-led executive will sweep the polls at the next general election.

According to Eweje, â€œthere is no problem in the state. Ogun is for PDP and PDP is for Ogun State. We donâ€™t believe in any parallel exco. Elder Joju FadairoÂ  is our chairman.Â  All the delegates who will vote during the state congress have emerged. There is no cause for alarm.â€

Reacting to the election, an Ogun West Senatorial aspirant, Chief Tunde Fadun said: â€œthe implication is clear, united we stand, divided we fall. The nationalÂ  leadership of the party is not interested in resolving the crisis. We shall all see the outcome. The party should notÂ  reward insubordination.

â€œThe national leadership has directed both factions to harmonise and gave us the template. The Joju Fadairo-led executive failed to obey the directive. WeÂ  did our own and went to court to seek legal affirmation and the judgement was that Chief Dayo Soremiâ€™s faction is the legal and authentic faction. That isÂ  where we stand.â€

PDP supporters are worried that the Fadairo faction is being backed by Governor Gbenga Daniel while the Soremi faction enjoys the support of Senator JubrilÂ  Martins Kuye, which makes it difficult to resolve the crisis.

Meanwhile, a stalwart of the party disclosed that if the crisis was not resolved within a week, many of the PDP bigwigs in Ogun State will decamp to ACN.