Bode George Rules PDP From Kirikiri; How His Candidate Floored Pedro, Others 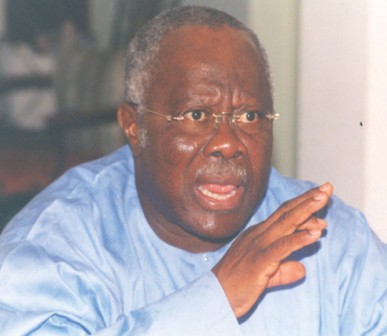 Despite being incarcerated in Kirikiri Prison for almost a year, Peoples Democratic Party, PDP, stalwart, Chief Olabode George appears to be ruling the partyÂ  from prison as his candidate, Dr. Adegboyega Dosunmu and loyalist clinched the Lagos governorship ticket of the party after winning the primary election by aÂ  landslide last night.

Dosunmu, who is known to be a staunch member of the Bode George faction of the PDP in Lagos, South West Nigeria, polled 431 votes of the total 864 votes castÂ  at the primary election.

P.M.NEWS gathered that Bode George campaigned for Dosunmu from prison through his telephone by liaising with party stalwarts.

Dosunmu, a former Director General, Nigeria Institute of Maritime Agency and Safety Authority, NIMASA, worked at the Nigeria Port Authority, NPA, and was aÂ  member of the Nigerian Maritime Association.

The result of the primary election was announced at about 1.00 a.m. today with seven governorship aspirants slugging it out to see who emerges as theÂ  governorship flagbearer of the party to face Governor Babatunde Fashola of the Action Congress of Nigeria, ACN, in the April elections.

Accreditation of delegates began around 12.00 noon yesterday and ended in the evening while the voting started around 11.00 pm with the result announcedÂ  around 1.00 a.m. today.

After the victory, Dosunmu pledged to work with other aspirants in the PDP in order to have one house and challenge the ACN for the governorship seat.

Chairman, Adegboyega Dosunmuâ€™s Campaign Organisation, Mr. Johnson Ladipo told P.M.NEWS that the road to victory of his boss had been a long journey and thatÂ  the camp was happy that he won.

He said the primary election was very peaceful and that the PDP was sure of winning Lagos State in the coming election and that the party was now having aÂ  new beginning in the state.

â€œWe have a team that can win Lagos State and by Godâ€™s help, we will win.Â  The people coming into the state on daily basis need federal help and we believeÂ  that if we win, we will have a government working with the Federal Government to improve the state,â€ he said.

According to him, Dosunmu would work with the other aspirants to wrest power from ACN.

â€œWe believe that Lagosians should have a positive life and we will ensure that the economy of Lagos gets what it needs from the Federal Government.Â  LagosÂ  generates a lot of money but the masses have not fed well in the past years.

â€œWe need to look at the welfare of the people inasmuch as we develop infrastructure.Â  We donâ€™t want a mega city with bricks but the people have to be happyÂ  and there should be a good atmosphere and good environment for businesses to thrive,â€ he stated.

The influence of Bode George will be felt again in the forthcoming elections in Lagos State as he will regain his freedom from prison next month.

George, a former Chairman of the NPA and others were jailed for two years for financial mismanagement at the port during his tenure as chairman of the board.

It was learnt that George and others would be released at the expiration of their jail term, while efforts have been on to ensure their release from prisonÂ  next month.