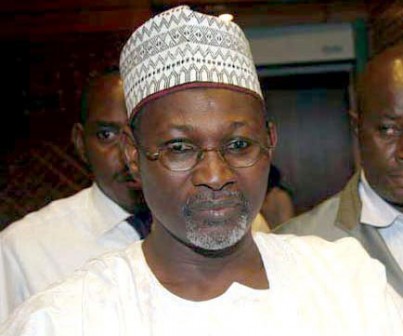 At least, 240, 000 adhoc staff have been mobilised by the Independent National Electoral Commission, INEC to carry out the nationwide voters registrationÂ  exercise which kicks off nationwide on Saturday.

Ogunmola said also that the commission would carry out the April polls in 8,465 polling units across Lagos State.

â€œThe polling units have been verified and harmonised, and can now be viewed on Google maps by every Nigerian,â€ adding that the commission has approved overÂ  8465 DDC machines.

â€œINEC has developed a software that is owned by the commission. This software will enhance and improve the accuracy and convenience with which the registerÂ  can be revised, updated and tackle the lingering challenges that have questioned our votersâ€™ register in the past elections conducted in the country,â€ heÂ  stated.

Meanwhile, the Chairman, INEC, Prof. Attahiru Jega has lamented that Nigerian politicians still see politics as a do-or-die affair, saying that there was theÂ  need for attitudinal change.

Jega, who spoke on a special edition of Democratic Licence, a television programme monitored in Lagos State on Monday, said that the re-run governorshipÂ  election in Delta State was an eye opener.

According to Jega, politicians engaged the services of youths to snatch ballot boxes and attack INECâ€™s staff, adding that â€œwe have learnt a lesson from theÂ  Delta State re-run election.Â  We will work closely with security agencies to protect our staff in the coming election.

â€œThings are changing, there must be serious efforts to prevent rigging at he coming polls.Â  We will make sure we prosecute offenders.Â  We have to ensure theÂ  integrity of the electoral process and the law has provided INEC such backing,â€ he added.

Jega stated that INEC has inaugurated inter-agency security committee to co-ordinate security as well as allow paramilitary personnel to complement theÂ  efforts of the police in curbing election violence.

â€œLocal stakeholders should contribute to efforts to provide security because they know these armed youth gangs.Â  Politicians need to imbibe the right mindsetÂ  in participating in politics.

â€œPoliticians need to get their act right; we cannot talk about democracy without imbibing the tenets of democracy.Â  When push comes to shove, INEC willÂ  insist that the law is followed to the letter,â€ he said.

The INEC boss disclosed that out of the 132, 000 Direct Data Capture, DDC machines the commission ordered, 110, 000 of the machines had arrived and would beÂ  used for the voters registration exercise, adding that the remaining machines would soon arrive.

Jega admitted that there were challenges ahead of the votersâ€™ registration exercise but assured that the challenges would be surmounted by the time theÂ  exercise commence on Saturday nationwide.

He also defended the closure of schools for the exercise, saying it was to prevent children from being exposed to danger, adding that classrooms would beÂ  used to store the DDC machines.

Jega was sure that the exercise would be smooth, saying that â€œwe can register every Nigerian of voting age within two weeks,â€ while urging Nigerians to turnÂ  out en-masse for the exercise.