Another 5 Perish On Ore-Benin Road 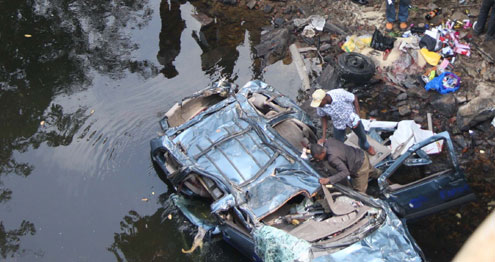 The wrecked car inside the river.

All the five passengers and driver on board a Toyota saloon car perished during a crash yesterday as the car skidded off the road and plunged into a river along the Lagos-Benin Expressway in South-South Nigeria.

gathered from an eyewitness that the driver was trying to evade a bad spot while on top speed.

As at the time P.M.NEWS correspondent was at the scene of the accident, five bodies had been recovered. They were suspected to be the corpses of four passengers travelling in the car and their driver.

As sympathisers tried to assist in the evacuation of the corpses, officials of the Federal Road Safety Corps were also on hand to ensure free flow of traffic.

The Lagos-Benin road, especially the bad spots near Ore, become a death trap where accidents have claimed several lives recently.