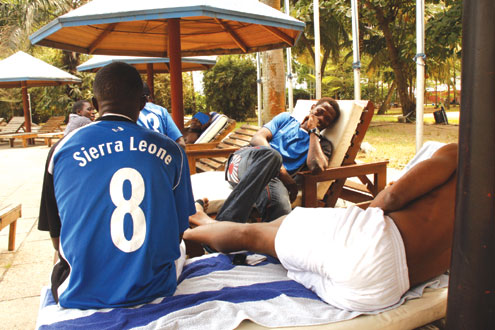 â€¢RELAXATION...Players of Sierra Leone relax at the pool side of Eko Hotels yesterday. They will play against the Super Eagles tomorrow. Photos: Emmanuel Osodi

Sierra Leoneâ€™s senior national team, the Leone Stars have boasted they would beat Coach Samson Siasia and his Super Eagles when they clash in an international friendly match at the Teslim Balogun Stadium in Surulere, Lagos, Nigeria tomorrow.

The Leone Stars, who are camped at the same Eko Hotels with the Eagles, said the Nigerian team should be ready for a tough match, warning that they are not in Lagos to admire the Mega City but to defeat their hosts.

Mohammed Kabia, a striker of Leone Stars told P.M.Sports at their camp in Lagos that the Eagles are not a threat to them. According to him, â€œthe friendly game will help us prepare for our the African Cup of Nations qualifier against Niger Republic, which weâ€™ll play in Niamey next month.

â€œThe friendly against Nigeria comes at the right time to test our readiness for the qualifier. Nigeria parade quality players and they are highly rated all over the world. That is why we see this interntional friendly as a good opportuntiy to test our fitness and prepare well for the challenge against Niger,â€ Kabia told P.M.Sports.

Nigerian born Sierra Leonean, Ayodele King, who plies his trade in Porth Authority FC of Freetown, said their team are not going into the match as underdogs, but are battle ready to give the star-studded Nigerian Eagles a good run for their money. He said:”Though we are here to play a friendly game with Nigeria, weâ€™ll not be intimidated by the calibre of players in the Super Eagles as weâ€™ll play the game as if our lives depend on it.â€

Also Speaking, Sherif Suma, who plays for Jonkoping Sodna IF of Sweden, said they will play a tough match against the Nigerian team.

Sierra Leone’s goalkeeper, John Tryre said he is ready to give his best and promised to stop the home team from scoring throughout the encounter.