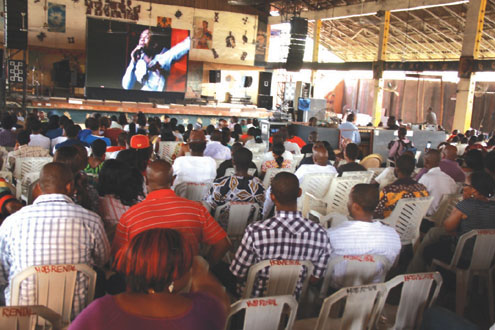 â€¢Fela enthusiasts at the screening.

On Sunday 6 February, FELA!, the most critically acclaimed musical broadway on the life and times ofÂ  the late Afrobeat legend, Fela Anikulapo-Kuti was finally screened in Lagos, Nigeria.

The screening, which saw hundreds of Felaâ€™s devotees and friends crowd into the New Afrika Shrine,Â  Agidingbi, Lagos for Nigeriansâ€™ first glimpse of the award-winning musical, was made possible by theÂ  British Council in Nigeria.

â€œIt was natural that it would be nice to show this in Lagos and in the Shrine, so the (NationalÂ  Theatre) provided a high-quality recording for us to show,â€ David Higgs, Country Director of theÂ  British Council told Showbiz Trends at the Shrine.

Ojoma Ochai, Assistant Director, Nigeria, British Council adds: â€œAs you understand what we areÂ  screening here today (Sunday) is the production of FELA! In London. The British Council, as you know,Â  create relationship between the people in Nigeria and the United Kingdom. So, we felt a production inÂ  London that tells a story of a great Nigerian like Fela would be a good way to nurture thatÂ  relationship. Thatâ€™s why we are involved in the screening of the show hereâ€.

She said the council will be fully involved in the live show of the broadway coming up in March withÂ  the entire cast of the original show in Nigeria for the musical.

FELA! according to Bill T. Jones, the Tony Award winning director and choreographer of the musical, isÂ  a triumphant tale of courage, passion and love, featuring Felaâ€™s captivating music and the vision.

â€œI think the manâ€™s story still has a lot of power. It has the power to inspire people and to turn someÂ  people off,â€ Bill T. Jones said.

Odebunmi, who spent most of her life in England said the English people loved Felaâ€™s music andÂ  personality so much and wasnâ€™t surprised with the role of the British Council in the screening. She,Â  however, frowned at the absence of the Pidgin language that Fela was renowned for.

â€œFela was a Pan-Africanist. He further internationalised Pidgin language in most of his songs.Â  Ordinarily, element of such should have been incorporated in the musical. But that aside, its anÂ  excellent production in honour of a genius like Fela,â€ she said.

Motivated by his mother, a civil rights activist, Fela, defied a corrupt and oppressive militaryÂ  government and devoted his life and music to the struggle for freedom and human dignity.