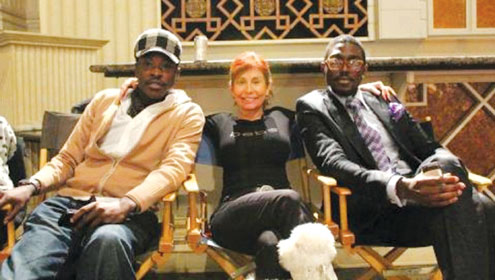 Black Gold production has inked a deal with De Laurentiis Productions to produce a film about theÂ  tragedy and injustice that plagues the Niger Delta region of Nigeria.

It is a story of murder, greed and corruption in the unsettledÂ Niger Delta RegionÂ of Nigeria. The filmÂ  speaks of environmental injustice and the fight over control of oil resources and revenue largelyÂ  generated from this region.

It is the story of a local communityâ€™s struggle against big-oil corporations and their determinationÂ  to win the rights for their land and their livelihood. Locals are caught in the crossfire after aÂ  devastatingÂ pipelineÂ explosion forces them to chooseÂ either protest and action or resort to violenceÂ  and kidnapping.

The line between good and evil is blurred as corrupt government officials, greedy oil companies andÂ  violent rebels go on a war path over oil spills and the degradation of the land caused by oilÂ  exploration.

Inspired by true events, Black Gold tells the story of the Niger Delta and its long and on-goingÂ  crises. The Niger Delta region of Nigeria has 606 oil-fields and exports 50 per cent of all its oilÂ  resources to the United States and is the worldâ€™s capital of oil pollution.

Fifty years of uncorrected oil spills and lack of clean-up has destroyed the environment andÂ  ecosystems leaving the area almost uninhabitable while obliterating the livelihood of its residentsÂ  costing them basic human rights such as health, access to food, clean water, and an ability to work.

Showbiz Trends learnt that Suzanne, became intrigued by this story and after meeting with Jeta,Â  decided to come on board as a consultant and one of the producers.

The movieÂ was also produced in collaboration with Wilson Ebiye of Rock City Entertainment and OriÂ  Ayonmike of Starkid Inc.

The film was shot on location in the Niger Delta region of Nigeria and inÂ Los Angeles, California.

Jeta Amata is coming from a family of veteran filmmakers (Ifoghale Amata, Zack Amata and Fred Amata)Â  and it is no surprise that he soars in the world of film and entertainment.

He rose to global prominence when he produced a film/documentary for theÂ BBC, British BroadcastingÂ  Corporation in 2003 using his film Game of Life as footage for the documentary.Â Black Gold will beÂ  premiered at the Silverbird Galleria onÂ 24 FebruaryÂ  and opened forÂ  public on 25 February, 2011.