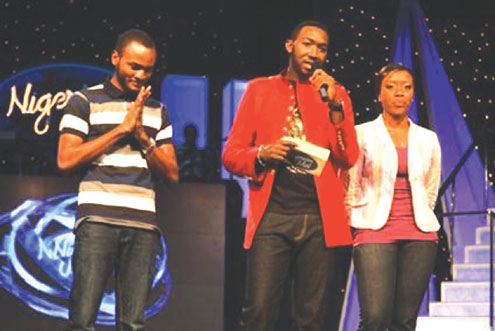 After their eviction was announced, the audience was treated to a recap of their journey so far, andÂ  it was an emotional experience for the judges and the contestants. In fact Bibi and George couldnâ€™tÂ  hold the tears.

â€œItâ€™s a tough decision to make, but if I had my way, Iâ€™d send Yeka Onka packing without looking back,â€Â  Yinka Davies, one of the judges said right before Anis announced Nina and Ola as the contestants withÂ  the lowest votes.

â€œI think Iâ€™d go with Yinka, I totally agree with her on Yeka,â€ Jeffery Daniel, another judge added.

But then, the format had to be followed. The judges no longer have a say, but the audience does, andÂ  so Ola and Nina had to leave.

Nina is a lawyer, but unlike most of the other contestants, she has a background in dance and notÂ  music. She has been a dancer since childhood and was a member of a dance group in university. TheÂ  group also incorporated singing in their performances. The graduate ofÂ University of NigeriaÂ  NsukkaÂ also manages a spa inÂ Abuja.

Ola (Olamide in full) is the most laid back among all the Nigerian Idol contestants. The 22-year-oldÂ  undergraduate ofÂ Babcock UniversityÂ claims that even though he is the first to sing professionally inÂ  his family, his family members are involved in music, whether singing on an amateur level or justÂ  appreciating good music. Before they left the competition, they performed for one last time.

Now with two people out of the competition, there are now 11 contestants remaining in the house.Â  Expect things to get tougher and more exciting as these contestants slug it out for the final prize ofÂ  N7.5 million and a record deal with Sony BMG.