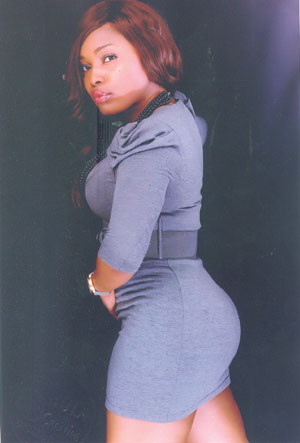 Actress Halima Abubakar is currently reaping the fruits of her labour as one of the most sought-afterÂ  Nollywood actresses. This, however,Â  would not have become a reality if she called it quits out ofÂ  frustration some years ago.

No doubt, Halima has paid the price of being a celebrity. She has experienced the good, the bad andÂ  the ugly moments, but her perseverance and never-say-die spirit has paid off after all.

The Kogi State-born actress, who attributed her success to the support of God, said she would haveÂ  quit acting some years ago, no thanks to some scandals that almost threw her off balance.

When asked if there has been any scandal that really hit her hard as an actress, Halima said: â€œA lot.Â  Those that almost threw me off balance that actually made me want to quit. In fact, I did, but someoneÂ  called me back and advised me not to allow all that to turn me off. Now Iâ€™m stronger and maturing withÂ  time.â€

A lot of rumours have trailed Halimaâ€™s career. She was rumoured to have dated former Super EaglesÂ  defender, Ifeanyi Udeze, after the footballer bought a car and also rented a three bedroom flat forÂ  her.

She was also rumoured to have engaged fellow actress, Tonto Dike, in a brawl. That is not all. She hadÂ  been rumoured to been dating a Lebanese and of course, Moses Ewang, a Nollywood director, whoÂ  allegedly fought a man in public because of her.

But she believes these are some of the prices she would pay for stardom. â€œEverybody knows Halima is aÂ  hardworking girl. And I acquired all I have through personal efforts, nobody bought anything for me. IÂ  donâ€™t have anything with Ifeanyi Udeze. If you know him, you can ask him if he knows me,â€ she said.

This cute actress added that she doesnâ€™t know any Lebanese, let alone dating him. She acknowledgedÂ  having a relationship, but claimed that the man in question is not a Lebanese as is being rumoured.

â€œAnd for Moses Ewang, he is my director for goodness sake. He is also my very good friend. Or is it aÂ  crime to have a man as your best friend? I have known him for close to 11 years. He had been giving meÂ  roles even when others failed me. I donâ€™t know anything about him fighting a man because of me. ButÂ  like I said, Iâ€™m used to such cheap lies,â€ said Halima.

Meanwhile, in view of these allegations among others, Halima, who is in her 20s, disclosed that top onÂ  her new year resolutions is to stop being too open-minded to people. â€œIf it were to be my former selfÂ  between 2006 and 2008, a lot of people will not talk to me because I was into myself alone. But when IÂ  became open to people, they took advantage of me. Now, I am back to my shell again,â€ she concluded