Amosun May Dump ACN For CPC 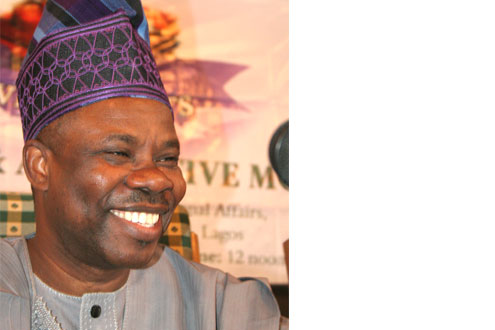 Senator Ibikunle Amosun , governorship candidate of the Action Congress of Nigeria is set to dump the partyÂ  to join General Muhammadu Buhariâ€™sÂ  Congress for Progressive Change, if the ACN leadership in the state continues to sideline him in decision making.

Under pressure Amosun, has been reeling under the tight-grip leadership of Aremo Olusegun Osoba and other leaders, such that he was not consulted as the partyâ€™s standard bearer before he was given a running mate, who happens to be the former commissioner of works in the old Osoba government in the state, sources close to the party told P.M News in AbeokutaÂ  this morning.

Sources said Amosun prefers a female candidate as running mate and was said to have told the leadership to give him three names, so that he could make a choice. But this request was rejected and instead Mr. Adesegun was imposed on him. â€˜â€™The governorship candidate should normally have the right to pick his running mate. It is his constitutional rightâ€™â€™, said a party sympathiser today.

According to sources, the lack of participation in the choice of a running mate is not the only frustration that the ACN candidate is facing in Ogun State. He was also sidelined in the nomination of candidates for state assembly, such that only a few members out of his supporters got nominations for the 26 member house.

There are also problems over who should be the senatorialÂ  candidates for the party in Ogun East and Ogun central. In Ogun central, Amosun is rooting for seasoned banker, Fola Adeola, butÂ  the Osoba leadership has selected Gbenga Obadara. In Ogun East, Amosun wants the ACN to field Senator Lekan Mustapha, who has left the PDP and who has a large following in the constituency. But the ACN has given the slot to Alhaji Gbenga Kaka, the former deputy governor under Osoba. According to political sources, Amosunâ€™s position is that his preferred candidates will add value to the party and boost the partyâ€™s chances in the April elections.

â€˜â€™They are not treating Amosun well and it appears that the CPC is prepared to offer him everything that he wantsâ€™â€™, said an Ogun State ACN official in a telephone interview this morning.

A source close to the camp of the Egba-born politician confirmed that Amosun was viewed by some ACN stalwarts in Ogun State as a Tinubu candidate and thus have to be close-marked.

The sourceÂ  confirmed that the official declaration of the Amosun group could be Sunday or Monday. The nomination forms and other documents have been taken, he said.

Senator Amosun ran on the platform of the All Nigeria Peoples Party in 2007 and came second in the hotly disputed election with incumbent Gbenga Daniel. The Amosun camp even believed it won the election and was robbed of victory by the Professor Maurice Iwu led Independent NationalÂ  Electoral Commission. Today, theÂ  the Amosun group has re-energised the ACN that went moribund with the death of its candidate, Otunba Dipo Dina last year.Â  The Amosun group is believed toÂ  constitute about 70 to 80 percent of the ACN supporters in Ogun State.

â€œâ€It is ridiculous that a political group with such large following is being sidelined in the affairs of ACN in Ogun Stateâ€™â€™, said a political observer.

One political observer said Amosun is being punished by the Osoba camp because of his past closeness to Daniel. In 2003, Daniel had ousted Osoba from office and Amosun had emerged the senator representing Ogun Central in the National Assembly.

â€œOsoba still holds grudges against Amosun for being part of the group that ousted him in 2003. He seems not to have forgotten thisâ€™â€™, alleged a n Ogun politician,.

â€œOsoba believed while with the PDP in 2003,Â  Amosun cooperated with Gbenga Daniel to remove him as Ogun State governor. He (Osoba) now thinks this is the payback time for him to frustrate Amosun,â€ the source explained to P.M.NEWS this morning.

The last straw that broke the camelâ€™s back was a meeting Amosun held yesterday with aggrieved members of the ACN, PDP and others. During the meeting, they were reported to have unanimously agreed to work with Senator Iyabo Obasanjo-Bello.

Contacted on phone this morning, Amosun could not pick his call because he was at another meeting. But his Personal Assistant, Seyi Enitan confirmed the looming political exodus.

Political observers were of the view that instead of ACN consolidating its hold in Ogun State and push out the PDP, they were busy fighting among themselves which may be detrimental to improving their political fortunes in Ogun.