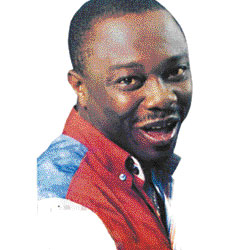 Popular comedian, actor and singer, Julius â€˜De Geniusâ€™ Agwu, has said that if not for procrastination,Â  he would have been more successful.

The Okombo crooner disclosed that top on the list of his new year resolutions is to stopÂ  procrastinating because the act is responsible for certain setbacks in his career.

The versatile entertainer reiterated that he would have started his television programme for the pastÂ  five years but the act of procrastination has been a major hindrance.

According to him, â€œI would have started my TV show for about five years now. I have written my sit-comÂ  already, the scripts and every other thing are ready, but because I kept procrastinating, it has notÂ  become a reality. So I hope that this year, it will stop.â€

In his bid to sensitise Nigerians on the importance of participating positively in the forthcomingÂ  elections, Julius said he has produced a 10-minute film titled My Vote Counts, co-produced with PhilipÂ  Bangwel.

Meanwhile, he will be at Transcorp Hilton Hotel, Abuja, this Sunday for a St. Valentineâ€™s Day showÂ  tagged Festival of Love. Other artistes that will join him on the performance train include MI, DareyÂ  Art-Alade, Iyanya, Waje, CD John, AY and Osama.

According to Julius, â€œit is about telling the people to stop the bombings, lootings, attacks andÂ  killings. Besides, Val is not all about locking the doors to celebrate love, there are people outÂ  there that need to be shown love.â€