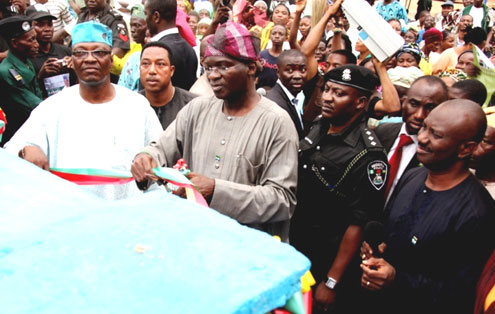 â€¢Fashola (left) cutting the tape for a rural electrification project with the Commissioner for Rural Development, Prince Lanre Balogun.

Communities in Ijede area of Ikorodu were provided with 500 KVA transformers to boost power supply inÂ  the area.Â  The communities are Surulere and Olorunsogo.

Fashola had gone to the area with his campaign machinery and officials of the state government thatÂ  included the Commissioner for Rural Development, Prince Lanre Balogun; Special Adviser on Health, Mr.Â  Toyin Amzat, among others.

At Olorunsogo area where a 500 KVA transformer was commissioned, several residents trooped out to meetÂ  the governor with songs and praise.

Fashola told the crowd that the state government did not import transformers again as it nowÂ  manufactures the equipment locally.

â€œWe did not promise to give you light, but we are doing it,â€ he said and called on the people to beÂ  ready to monitor and defend their votes.

A larger crowd thronged the venue of the handover of the rural electrification project, as an AgereÂ  masquerade also thrilled the visitors.

The governor urged the people to be vigilant by ensuring that when the Independent National ElectoralÂ  Commission, INEC, display the votersâ€™ cards, they should go there and check to ensure that their namesÂ  were not replaced with that of â€˜Mike Tyson.â€™

Fashola promised to deliver more rural projects to rural communities so that they could enjoy theÂ  dividends of democracy.