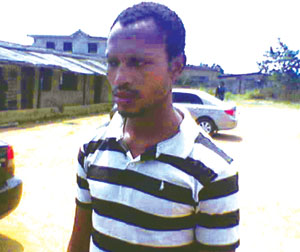 A 23-year old man has confessed that he carved an object that resembled a gun which he uses to rob people in Lagos, Southwest Nigeria.

Kolawole Showale confessed at Ejigbo magistrateâ€™s court presided over by Mrs. S.O. Solebo that he attempted to use the object found on him to rob before he was arrested by the police.

He also confessed that whenever he sets out to rob people, he wears military uniform to disguise as a military officer.

Kolawole, who claimed that he was a contractor and resides at Suraju Street, Okerube Ikotun on the outskirts of Lagos, said that he lived with his mom but she does not know where he was presently.

The defendant was arrested by the police at Jakande Estate, Bus Stop, Oke Afa, Isolo when he used a the carved object that looked like gun to rob Tovid Oluwasegun.

His attempt to rob Oluwasegun was foiled when the victim raised an alarm. When Kolawole attempted to escape, he was arrested by the people around and handed over to the police who took him to their station.

At the station, he claimed that he was a building contractor before he discovered the trick of robbing people with a toy gun.

He was eventually charged to court where he pleaded guilty and confessed that he was actually a robber.

While presenting facts of the matter, the prosecutor, Kunle Shonibare, told the court that the defendant tried to rob his victim with an object that looked like a gun but luck ran out on him when the victim raised alarm and he was arrested.

Shonibare told the court that the defendant, who may not have a record of previous offence might have used the object to rob many people and urged that he should be sentenced as the offence he committed was contrary to section 403 and 509 of the Criminal Code, Cap 37, Vol. 2 laws of Lagos State of Nigeria, 2004.

The court found him guilty as charged and ordered that he should be remanded in prison custody at Kirikiri, Apapa, pending when the court will sentence him in the next adjourned date, 7 March, 2011.