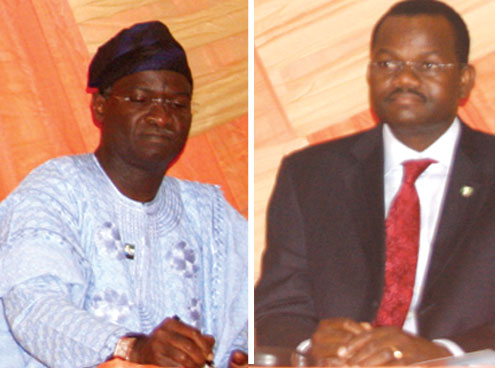 It was a sharp contention yesterday when Governor Babatunde Fashola of Lagos State , South West Nigeria and the Peoples Democratic Party, PDP â€˜candidate,â€™ Dr. Ade Dosunmu tangoed over the proposed 4th Mainland Bridge and taxation in the state.

Fashola had justified the need to build the bridge through the Public Private Partnership, PPP, whereby the bridge expected to gulp over N400 billion would be handed to foreign concessionaires who would construct it and recoup its money over time through the Build, Own and Transfer, BOT, system.

â€œAs my opponent promised that the Federal Government will do this and that, has it been able to build the Airport Road? If the Federal Government canâ€™t build the airport road, will it be prepared to build the 4th Mainland Bridge and other infrastructure?â€ On the issue of taxation, Dosunmu accused the state government of over taxing the people as well as collecting multiple taxes, saying that if he got a shot at the seat of power, he would liberalise the tax regime.

He even said he would grant emerging companies tax holiday for five years to enable them get strong footing on the economy before taxing them, adding that he recently flipped through the pages of one of the dailies and discovered that over 100 companies had relocated from Lagos to other countries due to power failure and heavy taxes imposed on them.

â€œTwo weeks ago, Nestle opened a multi-billion factory in Ogun State.Â  Why not Lagos?Â  Everything cannot be fixed in naira and kobo,â€ he stated.

Fashola countered Dosunmuâ€™s stance, saying there was no way a complex mega city like Lagos could be run without taxing the people duly, stressing that the issue of multiple taxation had been taken care of in the state.

â€œIt is not possible not to collect tax.Â  We cannot run Lagos State depending on the N72 billion we collect from the Federal Government annually.Â  The taxes we collect is income tax and are regulated by Federal laws and the National Assembly.

â€œWe have not increased the percentage of taxes being collected.Â  I cannot change the laws because I did not make the laws,â€ he said.Â  Earlier, the governor had assured the gathering of the administrationâ€™s desire to ensure continuity if given opportunity to serve again, citing various infrastructure projects which he said the administration was able to execute successfully in the last four years.

Fashola said through his administration, there had been a sharp reduction of violent crimes by about 80 percent, decline of murder cases by 85 percent, construction ofÂ  Bus Rapid Transit, regularisation of land title deeds and on-going development of Eko Atlantic City, on-going construction of Lekki-Epe Road, Lagos-Badagry Expressway and Light Blue Rail project, which he said, his administration had been able to achieve.

He said the state government under him would concentrate on full implementation of the first intra-city rail in West Africa, provide potable water for Lagos residents, open eastern and western corridors to allow easy entrance and exit into the state, and develop the tourism potential of the state.

On his part, Dosunmu said he would create a Ministry of Power and Electricity to address shortfalls in power generation.

On how he would successfully fund the state public utilities projects with his tax holiday programmes, the PDP candidate said he would access funds from Lagos Megacity Infrastructure Development Authority, which he said the Fashola administration â€œhas not been taking advantage of.

â€œPublic utilities like roads, education, transportation, potable water and health care should be the sole responsibility of the state government. Such services should not be provided through concession. Concession should be for two reasons. It may be as a result of lack of technicality and funds.â€