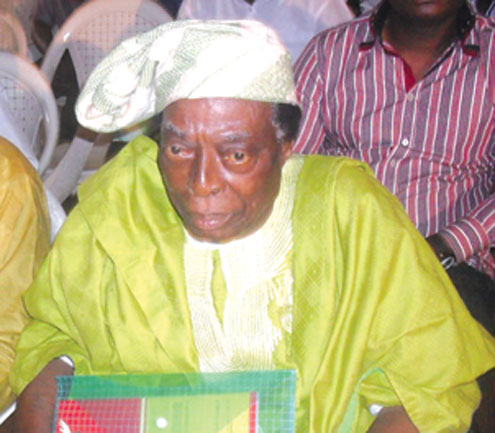 Octogenarian Chief Adebayo Faleti was born on December 26, 1930 at Agbooye, Oyo and lived in Obananko, Kuranga near Oyo, among others places between 1930 and 1939.

He then moved to Western Nigeria Broadcasting CorporationÂ  (WNBS-WNTV) at its inception in 1959 and was there until the corporation was split after the creation of Ogun, Ondo and Oyo states out of the old Western State, in 1976.

He retired as the General Manager ofÂ  Broadcasting Corporation of Oyo State (BCOS) a.k.a. Radio OYO, Ibadan. Faleti, who was encouraged by the then producer of Mo Kagoo (I offer greetings), the late Oladejo Okediji, was a pioneer teacher at Ife Odan near Ejigbo, a produce inspector and also practised as a sign writer when his father, Akanbi Faleti, returned him to Oyo in1949.

He founded the first operatic (acting) group in Oyo, having written and published poems and he won the Festival of Arts award with Eda Ko Lâ€™aropin in 1955.

In recent times, the â€œpoet among poetsâ€ has featured in many epic Yoruba movies, including Saworo Ide and Agogo Eewo, others.