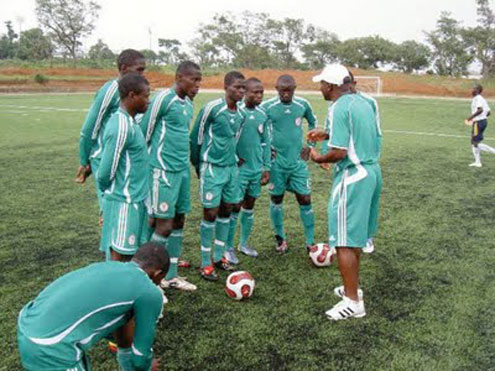 The political crisis rocking Libya, host country of this year’s U-20 African Youth Championship, AYC, is now a thing of great concern to the Confederation of African Football, CAF and Nigeria Football Federation, NFF.

NFF Head of Competitions, Dr. Mohammed Sanusi disclosed that football authorities on the continent as well as the NFF are closely monitoring the political crisis in Libya.

He said the football bodies are not comfortable with the situation in Libya because of the AYC slated to hold in that country between 18 March through 1 April.

According to Sanusi, the NFF is praying that the current political logjam, where the Libyans are calling for a political reform, and resignation of their president, Moammar Gadhafi from power, won’t get out of hand.

“We are monitoring the situation in Libya. We are watching events to see what will happen. We just pray that the situation won’t get out of hand so that it will not affect the AYC,” he said.

Nigeria’s Flying Eagles are currently in Turkey for the last lap of their preparation ahead of the youth tournament.

Hosts Libya are in Group A alongside Mali, Egypt and Lesotho, while Ghana, Nigeria, Cameroon, and Gambia are to compete in Group B.

The four teams in each group will play the first round on a round-robin basis, with the group winners and runners-up advancing to the semi finals to determine the eventual winners.

The semi finalists at Libya 2011 will represent the continent at the FIFA U-20 World Cup slated for Colombia later this year.

Libya is hosting the event for the first time and all matches are expected to be played in Tripoli and Benghazi.