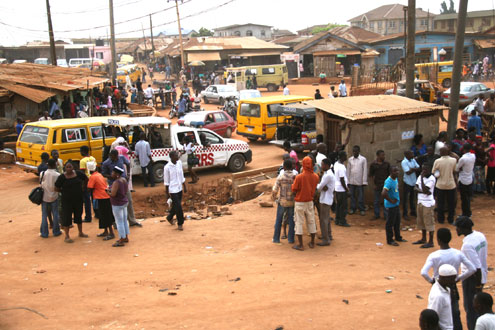 â€¢Residents discussing in groups at scene of the clash in Iju Ishaga this morning. Inset: One of the suspected hoodlums arrested by the police. PHOTOS: Olatunji Obasa.

Riot broke out at Iju-Ishaga, a suburb of Lagos, South-West Nigeria this morning after a member of the National Union of Road Transport Workers, NURTW, was stabbed to death last night.

P.M.NEWS learnt that the victim, identified as Olugbemi Ajibode was killed by a rival area gang known as â€˜Toyin Boysâ€™ at Iju-Ishaga axis of the state.

According to an eyewitness, the gangs had been in a bitter rivalry for the past two weeks and a peace parley was organised by a local fuji musician, Opontisun, to resolve the differences between the boys.

While the parley was going on, temper rose again.

Source said Ajibode had sighted one of the rival boys with a broken bottle and tried to talk him to throw the weapon away.

It was in that moment that a scuffle ensued, said the eyewitness.

Ajibode, P.M.NEWS learnt, was stabbed by the boy and other members of the gang before his own colleagues could get to the scene of the turmoil.

The deceased, aged 26, with three kids, was a prince in Iju. His remains have been deposited at the mortuary.

Already, the area has been cordoned off by the police from Area â€œGâ€ as at the time of going to the press.